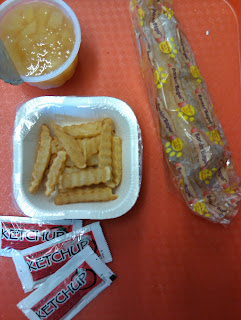 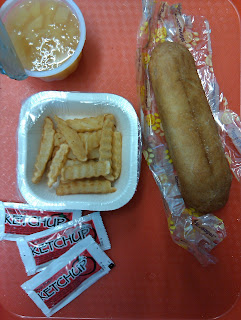 Today’s menu: bagel dog, fries, fruit cup
I smelled it. About 20 feet from the cafeteria, I smelled dough. And then the aroma of hot dog followed.
Gulp.
One of the lunch ladies offered me a choice: bagel dog or chili. I could have chosen the chili, but another teacher just bought the chili in front of me. What I saw was burnt brown stuff covered in plastic. I pondered for a couple seconds and this particular lunch lady gave me a look. It was basically a look of “how can you eat this,” which was confirmed when she said the dough was soggy in the bagel dog. She probably thought I was truly crazy when I said,
“I’ll take the bagel dog.”
Hey, this is the second to last week of the project! And the bagel dog that I had over a year was THE SAME LUNCH that put me over the edge and got me thinking about my students, the food, and what I could do about it. And here I am facing it again. A full circle moment!
I bought it and took it back to my room. Oh boy.
The bagel dog was…gross. I can’t sugar coat it. The lunch lady described the dough perfectly: soggy. The hot dog was a hot dog. The fries tasted like nothing to me. They needed ketchup or there would have been no way. The fruit cup? Been there before. 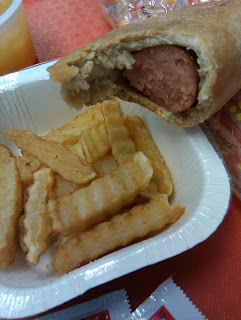 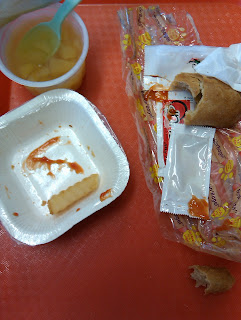 I’m sure the kids didn’t finish all the doughy bread.
***
I wasn’t sure I would bring this up on the blog, but Thursday night I was violently ill. You don’t have to look back to find out what I ate that day: school pizza. It was odd in that I had no inclination that I would be ill before it happened. I went to bed just fine, but in the middle of the night I woke up with a start and raced to the bathroom.
It was then that I had a case of the I-wish-I-could-die-right-now-you-know-whats. I was dripping sweat and writhing in pain. On the bathroom floor I promised myself: no more lunches.
But I wasn’t convinced it was the lunches. Because of the timing, I thought maybe it was dinner. My husband cooked fish plain in oil, rice and broccoli. We all ate the same thing. I was silently begging that my son wouldn’t experience digestive pain like I had.
When everyone woke up, my son was fine and I asked my husband how he felt and he said he felt great. Neither of them experienced anything all day. Just me. I have a sensitive system, but wow. That was like no other.
I told my husband about my middle-of-the-night-promise to stop eating lunches and his response, “You can’t. You have to finish this. You’ve got to see this through.” I nodded solemnly. I even told my mom about it and she agreed, “You can’t stop. You’re too close.” I can’t wus out now.
My husband had the best line of all, “C’mon, it’s only 10 more days of diarrhea!”
We all had a good laugh over that one.
***
EAT ALONG CHALLENGE – MY SON’S LUNCH 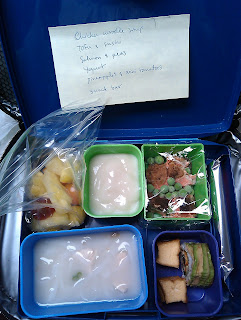 plenty of finger food
My son’s lunch from bottom left, counter-clockwise: chicken and rice noodle soup (restaurant leftover), tofu and california/eel sushi roll (restaurant leftover), packaged gluten free snack bar far right, salmon (gluten-free bread crumbs fried in oil) and peas, coconut milk yogurt, fresh pineapple and sliced mini heirloom tomatoes. It’s for lunch and two snacks.
I use Laptop Lunches for my son (he’s two) and have been since September. He thinks all the containers are pretty fun. Normally the lunches aren’t this elaborate. We had restaurant leftovers (Thai/Japanese place last night) so I used them in his lunch since he liked those foods. I try to mimic the lunches that are served at the daycare, but recently I discussed it with one of his caregivers and she said that he likes eating his lunch and doesn’t seem to be too bothered if I deviate from what the other kids eat. So I feel like I can be more creative going forward. I’m lucky that my kid is a good eater.
Today at daycare the menu was ground beef, tater tots, diced pears and diced carrots with fruit and ice cream (?) as snacks. The menu says “ice cream” but I just can’t believe they actually do that; I haven’t seen it. And my son has never participated in ice cream as he has been “lactose intolerant” ever since he started there. But lunch sounds great, right? Well, yeah, but the tater tots come from a bag and the pears and carrots come from cans. I know this because I have visited at lunch. His caregivers know that my son is not eating gluten or dairy and that I prefer fresh foods. But I want him to participate whenever possible. For example, if they are slicing up bananas for the kids, my son can eat them too.
I have recently started writing up what is in his lunch on a post-it and putting it in his lunch because his caregivers will ask things like, “Were those purple potatoes? Were they dyed with food coloring?” When the kids last had tater tots, I bought some purple potatoes at Trader Joes and sent them for him with ketchup for dipping. Also he got quinoa in his lunch and they were perplexed as well. I love that they are learning about new foods through my son’s meals.
Well, today when I picked him up, the lunchbox was empty. He had eaten everything. That doesn’t always happen, but it did today. He loves all of those foods, especially soup, so today’s lunch was a hit. I’m probably going to do some kind of soup for tomorrow too because it’s supposed to be in the single digits. Brrrr.
I’m thinking about whether or not I should get myself a special lunch bag or system for when I return to packing next year (can’t wait!!), but I might just stick with what I had before, which was a generic lunch sack. I don’t have a ton of time to eat so the above would be too much food for lunch for me (and too much fiddling around).
Cost calc? Sorry, I don’t know but it’s probably more than $3 considering the restaurant fare. Tomorrow’s lunch will be a typical example of what I send and a mimic of the daycare menu, aside from the fish nuggets. *shiver* 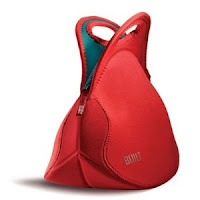 A red Built NY Neoprene lunch bag. Anyone who participates is eligible, even if you are only able to participate for one day this week. Winners to be announced next week.