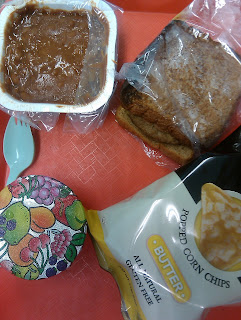 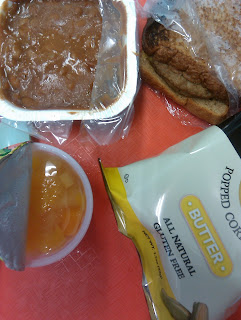 I took the meat out of the sandwich and ate that. There was cheese on the patty of which I neglected to take a picture. The cheese had soaked into the bread quite a bit. Putting the patty melt in a plastic bag (crossing my fingers that it doesn’t release chemicals when exposed to heat) seems more environmentally friendly than placing the patty in its own paper box with plastic over it. Roughly several hundred to 1,000 single use paper boxes per day per student and, well, can it go on forever? Is there an unending supply of landfill space?

Confession: I’m a big fan of baked beans. They were my favorite food growing up. They tasted good to me today, a little on the sweet side. I don’t know what the ingredients are for these baked beans, but I have a can of Bush’s Best Maple Cured Bacon Baked Beans in my pantry and the ingredients are:

What is “maltodextrin,” “autolyzed yeast extract,” “natural smoke flavor,” and “natural flavors?” All wheat-based additives and MSG, correct? I almost distrust “natural flavors” more because I know something is being hidden from me… 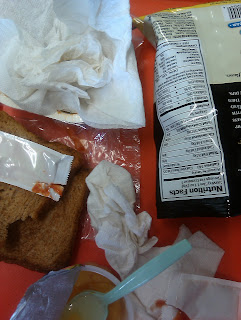 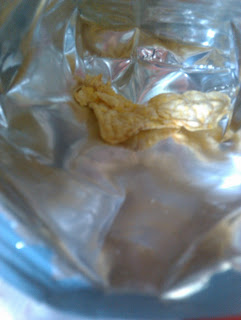 I liked the chips… 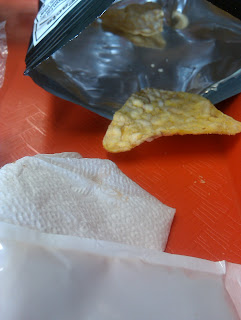 …but I’m a bigger fan of less processed popcorn

Popcorn is one of my favorite foods. I went through a stage post college where I ate a package of Pop Secret Homestyle microwave popcorn at least every other night. I wouldn’t do that now that I read ingredient labels (lots of trans fats) and also that many bags of microwave popcorn are lined with BPA (just like most canned goods). I will always love popcorn though!

Within the past few years, my school lost a teacher to a health problem no one knew about. He was close to retirement, but never made it. This man was “old school” in a teacher-behind-the-desk-work-copied-from-the-board kinda way. Had I judged him on his “traditional” ways and his decidedly 1970s glasses, I probably never would have had any conversations with him. Many new teachers dismissed him at a glance. But he and I became close because we were kind to each other.

He told me that I was different than other teachers (probably because I talked to him and treated him like a human being) and he gave me a small present for my son before he was born including a handwritten note on an index card that I still keep on my desk here at home. I’ll never forget his advice on parenting after I returned to work (he also had a son). He always had a laugh, a smile or a little comment for me in the hallway. Without fail he cheered me up. One time he explained his teaching philosophy to me in a sentence, “I take what each child gives me and I meet them there.” That was one of his many contributions to my life. I wish I had spent more time in his classroom.

I didn’t cry much at school the day we found out. I was in shock. Really? Him? But my sadness poured out randomly over the weeks and months following his death. In the car. Saying goodbye to a different coworker. Walking by his classroom. Other teachers sobbed that day. I couldn’t make eye contact with his closest friends in the school. Most people openly grieved. I wanted to as well, but I couldn’t.

The next school year, a new teacher took his place and re-did his “old school” room…completely. When I entered it for the first time, I could barely hold it together. I confided to someone how I felt and she said, “I know it’s hard. You know, I have grieved and knowing that he’s in a better place helps.” I’ll never forget him and his impact on my career. Here’s to you my old friend! I wish I could tell you about what I’m doing now. I’d love to hear your valuable perspective. I guess I’ll just have to assume that you’d love it. At least that’s what I’m going to pretend.