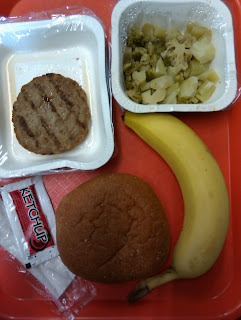 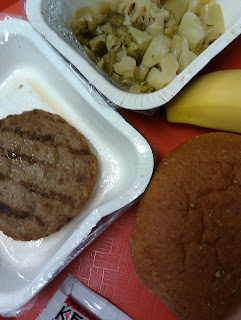 I’ve had this meal many times before just like most of the other lunches I’ve eaten. I was a little surprised to have broccoli again today considering I just had it yesterday, but I think it was a last minute substitution. It was in sharp contrast to the broccoli from yesterday. That broccoli was brighter in color and this poor broccoli looks like it had a hard day. 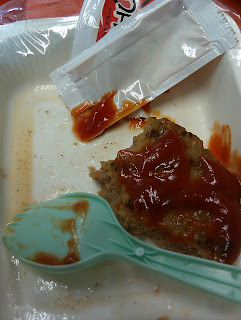 It’s mystery meat but no surprise to me! 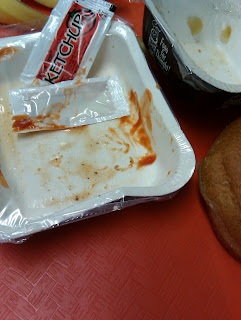 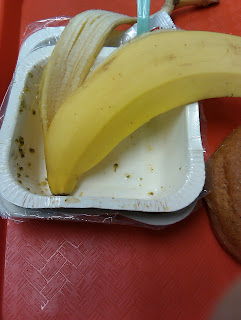 my finger snuck into the shot…
now I’m going to have to cut it off so as not to out myself
***
Tomorrow is Veteran’s Day so there is no school for me. I know many schools don’t cancel school for this holiday, but my district does. Then on Friday the teachers have a professional development day so it’s a non-attendance day for students yet again. I feel like there are a lot of professional development days on the calendar, especially in the first half of the school year. I feel some guilt over it because I worry the students aren’t getting a lot of academics at home. Selfishly though I like my teacher inservice days because I do learn something (not always, but most of the time) and I can get a lot of paperwork and organizing done in my room.
A reader sent me a link to an article: Year-Round School Gains Ground in US. I discussed this before on the blog, but I wanted to revisit it.
First of all, “year-round” school is a misnomer. Basically, it’s just a shorter summer. In my district there are already many schools doing it and it only means that summer vacation is just about six weeks long instead of 10-11 weeks. Those other weeks off are sprinkled throughout the year. One of my friends works that schedule and she told me she loves it. She is single, at least 25 years older than me, and travels all over the world with any spare time she has. She has always wanted to travel in the Fall, but she never could because she was working. Now she gets a two-week break in September/October and can jet off to exotic locales all four seasons.
But the change in the school calendar is being put in place not for teachers to take vacations: it’s so that students benefit from a shorter summer off. I see regression in skills come September. Many of the students I work with are not getting a chance to do much with themselves over the summer. Even with a plethora of park district programs available, my students’ families can’t afford them or if they can, they don’t have transportation. My students play too many video games at home. It’s surprising how many people have multiple gaming systems. I may never understand that as an adult, but I do remember being obsessed with my friend’s Super Mario Nintendo game in fifth grade. It’s powerful stuff and luckily for me my mom banned video gaming systems from the house. It seemed positively Draconian, but now video games at home are even more ubiquitous.
I think that another reason “year-round” schedules are powerful is that children have trouble with transitions. I also have difficulty with the dramatic transition from crazy school days in June to boring laundry at home. Alternately the build-up of my anxiety with the start of school in August is overwhelming (although I might be a special case). Regardless, if kids are in school more often, the transitions would not be as big and potentially scary.
The article mentions at the end that many ELL (English Language Learners) spend the summer months immersed in their home language and that the transition back to English can be challenging. I would say that the typical child with average abilities and literate and supportive parents can handle going back and forth in two languages. It’s the kids with special needs who are learning two languages who can’t readily slide between the two languages.
One of my coworkers is of Mexican descent and speaks perfect English and Spanish. I asked him if his parents spoke Spanish at home and he told me that they didn’t. So I followed up, “Where did you learn Spanish?” He replied, “My siblings and I spent every summer with abuela and I learned how to speak Spanish because that’s all she knew.” So shortening summer in his case would have meant that he lost out on an amazing experience with his abuela (grandma). Changing to a “year-round” school schedule is not a plain and simple decision.