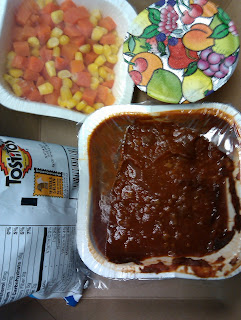 Do you spy what I spy? Yep, a paper tray. I really couldn’t believe my eyes. I gasped. Styrofoam is the go-to when there’s a dishwashing issue or if the lunch ladies put together a lunch for me when they see me enter the cafeteria (before I grab an orange tray). I know, what service! I have to say that the plastic trays stack up quickly in my room and I don’t get back to the lunchroom that often…certainly not with a conspicuous stack of orange trays. On the other hand I have saved all of my styrofoam trays for who knows what (postcards possibly!).

I’m hoping that paper will be the permanent substitute for styrofoam when there is need for a back-up lunch trays. I’m thinking it’s way more expensive to offer paper, but at least it breaks down in a landfill unlike polystrene. Hip, hip hooray for paper!

The chili was good and easy to eat with the chips. Everything went down in about 10 minutes…or less. Today I was so immersed in my job that I forgot all about my internet-alter-ego. All of a sudden when there was a break, I remembered with a jolt, “Oh, I’m Mrs. Q…” I have to say that sometimes I just want to go back to normal… 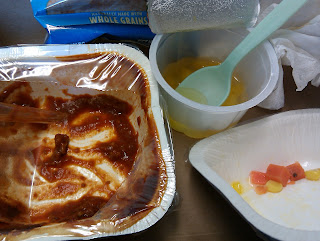 In a big hurry today so I didn’t take a lot of pictures
I’m listening to the Omnivore’s Dilemma on audiobook while driving to work. It’s not for the faint of heart: the book is interesting, but I feel like it is exponentially more depressing than Food, Inc. He brought up labeling briefly and mentioned that some companies will print on packages “and/or” because it gives them latitude with ingredients based on cost. For example, if one ingredient goes up in price, they can use a substitute that is cheaper to maintain a consistent low cost to the consumer and without changing the packaging.
I thought to myself, “wouldn’t it be interesting if I could find a product with ‘and/or’ in the ingredient list?” Well, today was my lucky day in more ways than one! 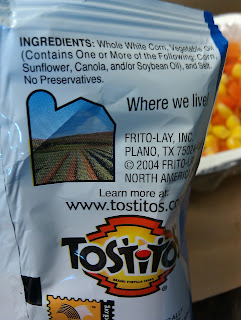 It should be noted that chip bags, chocolate wrappers, and branded containers are not made at the same place as the food that they hold. In one of the cities I lived in as a child (I moved around a lot), there was a medium-sized printing factory (big employer for the community). When I found out that the factory printed things like Snickers and KitKat wrappers on big sheets of foil/paper/whatever but didn’t produce the chocolate inside them at the same time. I was young and it was one of many does-not-compute moments (picture: dog cocking head to one side).

We know it’s difficult it is to get ingredient lists for school food. They aren’t distributed to parents, they aren’t posted in the cafeteria, and they aren’t on the school district’s website. But then there are companies like Frito-Lay who print ingredient lists with “and/or” and they make it even harder for people with food allergies. I tried to do a google search for information about any food labeling acts. I feel like a couple years ago there was an act in front of Congress about more standardized food labeling, which was defeated due to food companies’ lobbying efforts. I could only find the FDA’s website. Labeling should be all about the end consumer, not a company’s convenience!