If you have been reading this blog for awhile, you’ve heard me talk about how I dislike and mistrust corporations. One day it will be abundantly clear why when I share more about my life, but for now you will just have to trust me: it is a strongly held opinion based on something that happened. Many of you have commented that not all corporations are bad and maybe I need to back off a little. Well, life went ahead and proved you right.

I went to BlogHer Food, which was made possible by contributions by corporations. At first I was a little uncomfortable about that relationship and I wondered privately if it was really on the “up and up” for me to attend. I decided to withhold judgment until I got to the conference. That proved to be wise of me.

Anyone at the conference could attend any session. So there were employees of sponsoring corporations and PR people attending different talks and a couple representatives sat in during our session on the Values track. The way that BlogHer manages the crowd is smart: people who are watching are able to comment while the chat is underway. 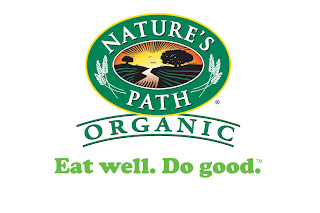 The very last person to make a comment was the representative from Nature’s Path Organic. She stated it exquisitely, “I’m mad! I’m mad that more people aren’t upset about school food! You know, I work for an organic company and even during a recession our sales are up. Why can’t more companies do the right thing for people?” I was stunned.
After the talk I found her to chat. It was refreshing to hear about Nature’s Path and to hear about all of the amazing things that they are doing for people (school gardens too!) while also putting out a fantastic product for adults and children.
She mentioned a further detail as it related to school lunch. She told me that she had met people in control of buying food for school breakfast programs (if you look at their product mix, it’s geared toward breakfast). I don’t remember if the people were part of a school food company or directly from a school district. Nature’s Path displayed their product selection and were endeavoring to get some of their heritage grains onto the lunch trays of students. Well, the buyer did agree to purchase something for their school breakfast program, but it wasn’t a cereal grain. The company or district purchased Nature’s Path’s wholegrain toaster pastry… The Nature’s Path representative told me that they were thrilled to get the sale of that product, but they felt some disappointment that their other products were passed on.
I don’t know about you, but if my school district bought heritage grains for breakfast and actively promoted the offering to the parents of the students, participation in the breakfast program would increase dramatically. In fact if my son was attending that school, I would send my child to school hungry and with money to buy breakfast and feel confident that he was getting a solid start in the morning. To me it seems short-sighted to choose only the toaster pastry. Certainly it could be a money issue, but if this company or school district is able to purchase the whole grain toaster pastry, they must have some money. Not to mention offering higher quality school food options would bring in extra dollars.
(On a side note, I think districts need to start sending out surveys to parents and finding out if they would be willing to pay for higher quality lunches and offer examples of the kind of food that could be available with a funding shot in the arm)
Anyway, I hit it off with the representative from Nature’s Path. She offered to give me a tour of their production facility if I ever visited their factories (in the Canada/Washington state area). I told her about our Twitter/Blog party in August and that #lunchrevolution became a trending topic on Twitter in Canada. Notes from a Cookie Jar and I want to do another Twitter/Blog party in January and it looks like Nature’s Path is in!
I feel great that corporations are out there who are doing right by people and it’s very encouraging that they can turn a profit too. 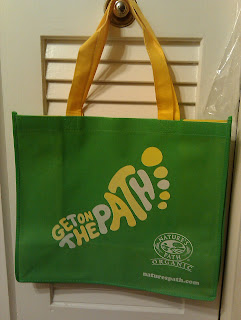 Another giveaway!
Towards the end of the conference I passed by Nature’s Path’s booth and they had some extra bags that they didn’t want to haul back with them. I took as many as I thought I could fit into my suitcase. I’m giving away SEVEN reusable grocery bags exactly like what you see above! To enter, please comment on this post.
Later at a BlogHer Food party,﻿ I got two very interesting kid-friendly samples from two other companies: 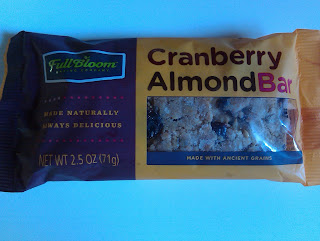 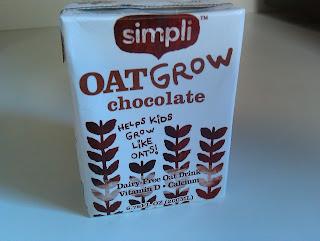 Dairy-free chocolate oat drink!
The company is so brand new that its website isn’t working yet!
*UPDATED: Here is a working website for the Oat Grow drink: http://www.livesimpli.com/
I also forgot to say that it was delicious!*
No samples to share with you of those products, but just knowing that they are out there is comforting. Developing connections with amazing companies doing good things made me feel better about corporations in general. It’s nice to feel inspired by organizations instead of feeling let down.

67 thoughts on “got corporations? *UPDATED*”