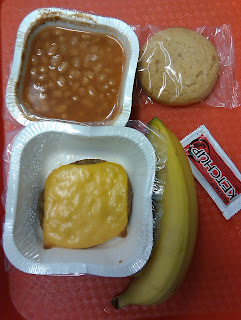 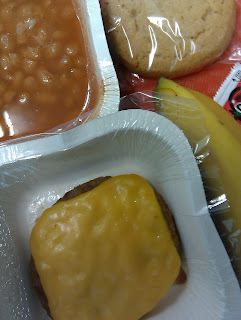 Today’s menu: cheeseburger, whole wheat buns (not pictured), banana, baked beans, cookie
There’s today’s lunch. I grabbed the cookie not the buns. I ate the patty, the beans, and the banana: 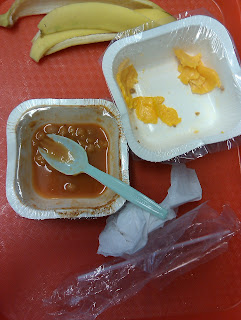 I do a lot of tweeting (my husband calls it “twitting,” which sometimes seems appropriate). No one has ever asked about how I got into Twitter, but I want to share the story.

A few weeks ago I blogged about my friend who got me into blogging (in 2004 I started a personal blog read by only my mom and my sister, which I updated through last year). Well, that friend is the exact same person who introduced me to Twitter. She got an account pretty early on. I looked around on Twitter after she told me about it. It didn’t seem like it was my thing so I didn’t get an account at first. I didn’t want to give status updates to people I didn’t know. But after a couple months, I figured I would get an account too, mostly because I wanted to follow people who were famous (Mark Bittman, Rick Bayless, Yoko Ono, Venus Williams, Andy Roddick, Al Gore, Dooce, Anderson Cooper (side note: yum), Augusten Burroughs, Oprah, and on…) Yes, I have a personal Twitter account that I used for a short while with about 150 followers. It’s a protected acct, but don’t worry: I no longer tweet there (too busy for two accounts).

I started a Twitter account for Fed Up With Lunch because I liked that Twitter had a broader scope than Facebook, but it was more “anonymous.” Since I am anonymous, that feature lined right up with my initial goals. I thought about starting a Facebook account for this project, but I didn’t want it to be found by my coworkers who are on Facebook. Although there are tons of people on Twitter, only 2% of my real life friends are on Twitter compared to 98% of them are on Facebook.

I enjoy tweeting because it’s fun to connect with people who are interested in similar topics (food, education, school lunch, parenting, etc). They are people I would never have met without having a Twitter account. Also I credit my Twitter account for making Fed Up With Lunch a successful blog. It’s the PR department!

Recently (10/16) one of my tweets was on the front page of Twitter. That was really cool. It was a quote that was retweeted more than 30 times: “Farming looks mighty easy when your plow is a pencil, and you’re a thousand miles from the corn field.” ~Dwight D. Eisenhower  Too damn true!

10 thoughts on “Day 133: cheeseburger with a side of twitter”