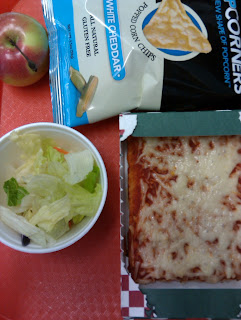 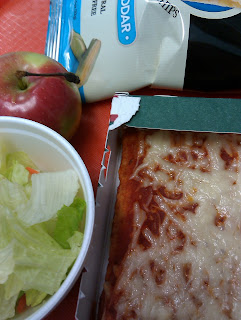 Today’s menu: pizza, salad, popcorn chips, apple.
Yeah for salad and a real apple (love that the apple had a longer stem — evidence of the tree!)…. Also notice that the popcorn chips are clearly marked “gluten free.” Great information on ingredients for me!
Confession: I didn’t eat the pizza. For the first time since January, I didn’t at least take a bite of the main entree. I feel bad about it, but I really don’t want to eat that much gluten and dairy (I really do sleep worse after eating gluten during the day). How weird this project has been…. I was just your normal person with an average “food IQ” when I started out. I didn’t like the pizza at first, then I went through a phase where I enjoyed it, and now I’ve come full circle: I just don’t want to eat it. So I left it in one of the teacher areas. (That’s also what I do when I’m mistakenly given a pint of milk). Someone would have come along and eaten it… things always get eaten up quickly by teachers passing through.
(Side note: Years ago a teacher’s sandwich left in the fridge in the teacher’s lunchroom was eaten. That’s bold — most teachers’ stuff in the fridge is left alone. Usually the culprits don’t leave any evidence, but this sandwich eater had come in and eaten the middle of the teacher’s sandwich, leaving the crusts! That still makes me smile…) 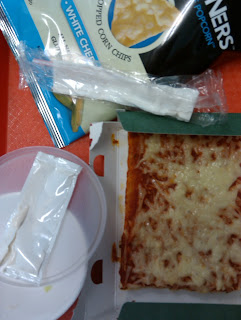 My body feels better since basically abandoning gluten and dairy at home. I have lost two pounds, which has to be in “bloat.” My tummy feels “looser” (no way to really describe it the feeling) and my pants fit a little better.

Last night this article was published: Most school garden produce is forbidden fruit in Chicago Public Schools (CPS) lunchrooms. Basically the Chicago Public Schools who are lucky enough to have school gardens can’t even use the food they grow inside the school. They have to take the produce home or sell it. The district and the school food company have an agreement by which no other produce is in the cafeteria unless this other produce meets oddly stringent requirements (basically truly organic) to which the school food company isn’t held.

Who would do this? Is it because the school food company doesn’t want the competition from the school garden? It seems like puny competition in scale. I have to say I don’t understand why a rule like that would be in place…. Those in power cite “safety” but wouldn’t a bigger safety concern be when the kids are actively working in the garden (e.g. they are working with large tools and could fall down) versus eating something they grew themselves?

The idea of taking home a tomato you grew at school is a nice thought. But I think it would be a powerful education tool if it could be sliced up and pieces could be given to each child. We grow it together, we harvest it together, and then we eat it together. (Note: when I volunteered at Common Threads this summer, the kids worked in the garden, then cooked up the food and ate it. I won’t forget one of the chefs holding this massive bunch of Swiss Chard with a huge smile on her face. It’s pretty miraculous to grow something and then eat it with deserving children.)

The Chicago Tribune article above deeply disturbs me. But I have to tell you that this is not new information. I had heard about this already, but I didn’t have a reliable source to quote. In fact, I had heard that at one CPS school in particular which has a nice garden, the kids can’t even walk through the cafeteria holding produce from the school garden. My head is spinning!

But that gives me a great idea for a protest. Let’s walk around carrying produce to unlikely places! Let’s do a “flash mob” where everyone carries produce and then does a little dance number! If they can make ridiculous, arbitrary rules, then we can organize whimsical produce flash mobs…

Loyal readers, I just wanted to thank you for checking in and also for forgiving me when I don’t get a chance to tack on a comment after one of your insightful ones. I was checking the google analytics (a hit counter basically), which I look at for a couple minutes every two months and I wanted to share with you that 50% of my daily hits come from returning users (20% are new visitors). Just wanted to thank my “base” (now I sound like a politician on one of those terrible negative ads I keep seeing on the TV…when will it stop!?) for being committed to reading my content every day.

So those of you who are coming back frequently, what other topics do you want me to touch on that I haven’t mentioned? Do you have any other suggestions? I have a corporations post written up for Friday, which I think you will enjoy quite a bit!