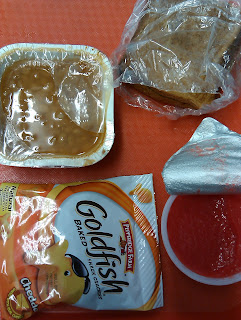 At first I thought it was grilled cheese… 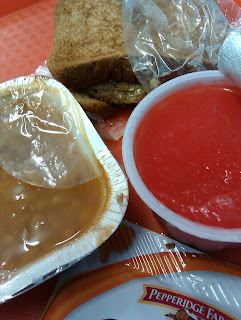 Wait, is that meat sticking out? 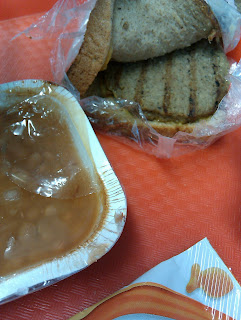 That’s a burger, folks!
Today’s menu: patty melt, baked beans, strawberry applesauce, goldfish
I put the tray down, took a picture and then noticed…it wasn’t a grilled cheese! This is the first time I’ve seen a pre-made burger instead of it being in its own little paper box. I think it might be an improvement because there is less waste. On the other hand it is heated in plastic… the jury is out…
I ate the patty and the beans, but I had trouble with the applesauce. The electric red gave me pause. It’s moments like these that I wish I had an ingredient list. I’d love to just double check the ingredients. If it’s apples and strawberries, I’d eat it (even though I would normally purchase organic for my consumption). But I can’t be sure it doesn’t have a red dye in there. Dyes worry me. I dipped my fingers in it to see how it tasted. I think there might have been real strawberries in there, but there had to be dye too. So I gave up on the applesauce. 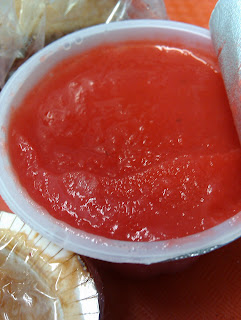 Tough choice, but I threw most of it out
***
I went gluten-free yesterday as an experiment and I felt amazing all day in spite of not sleeping much this weekend. I also basically was gluten-free much of the weekend. That makes me wonder… I also chatted with Alison St. Sure about living gluten-free and how she was diagnosed.
You know, I have had major issues with gluten ever since I got serious Salmonella poisoning while abroad in 2002. I didn’t give it much thought — I just avoided too much fiber. In 2007 I had a little trouble getting pregnant so I went gluten free for one month in 2007. I felt good and was tested for Celiac at that time. It was negative so they told me it was IBS and prescribed an anti-spasmodic drug (I never filled the prescription… it seemed ludicrous to get on a med). I figured that if the test said I didn’t have Celiac and I went back on gluten. But this year I insisted on another blood test for Celiac. It was negative once more. Again I assumed that was the end of it and it must be in my head.
Alison told me that even though someone doesn’t get a positive on a Celiac blood test, it doesn’t mean they don’t have sensitivity to gluten. That blew me away. Using Dr. Google, I found that she is right. I’m thinking about ordering a test from EnteroLab or just simply go gluten-free at the end of the project. I’m already basically dairy-free since January (when the daily pint of milk in the school lunch upset my tummy). I hadn’t been drinking very much dairy and it finally clicked after I started the project.
I didn’t eat the bread from today’s lunch even though I know that it’s possible that the meat patty and the baked beans contain trace amounts of gluten. What next? Hmm, just thinking aloud. Please don’t try to convince me to stop the project. I’m determined to finishing out 2010. I have about two months to go. Then most likely I’ll go strictly gluten-free. Who would have thought? At the beginning of the project I was eating milk and bread and at the end I might be dairy-free and gluten-free!
Before I even chatted with Alison this weekend and found out about gluten sensitivity, I bought Gluten Free Girl and The Chef. Earlier that same day I had been chatting with Shauna and, you know, I just like her. So I bought her book. I can’t resist sharing the dedication page: 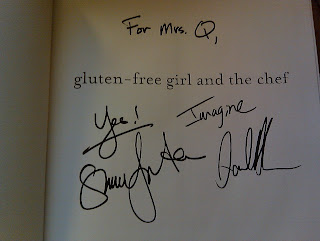 I might be doing a lot more cooking from it than I initially thought!
***
Resources:

News You Can Use: Resources to Help Turn Your Food Writing into a Powerful Voice for Change — In a word: AMAZING!

Articles:
School cafeterias to try psychology in lunch line – Ok, interesting…here’s my finding: they need more time to eat.
Kids, Most At Risk, Getting 40 Percent of Calories from Junk Food – Disgusts me.
***
I put the poll up for September’s Titanium Spork Award (upper right) — I called Kate Adamick a chef, not sure that’s correct. Sorry about the typo!
***

38 thoughts on “Day 122: patty melt and thoughts of gluten-free living”