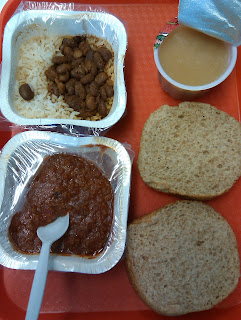 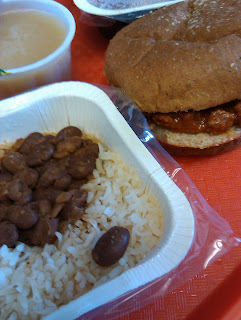 Looky here, we have a new menu item again! Wow. The sloppy joe wasn’t baaad…but it was sure messy. I would have taken a picture if my hands weren’t covered in sloppy joe fixings. The “joe to bun” ratio was a little skewed in favor of the meat. I think I could have easily made two sandwiches with all the stuff I got. I didn’t have the chance to see the what the cafeteria looked like, but I bet it was a mess. Often I’ll see the students with big stains down their shirts after lunch, but today nothing stood out.

I have never eaten beans and rice mixed together in the same little package before. You can see (below) that the beans were a little on the dry side. I think they were seasoned, but they need some kind of sauce.

I’m happy that the applesauce was unsweetened and there were no dyes like before.

All and all: it’s very brown, but it wasn’t bad. (I like making sloppy joes at home with ground turkey) 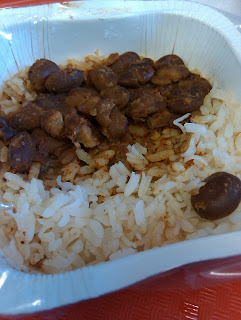 One
A student of mine packs his lunch. Last week on pizza day I asked him what he had for lunch and he said, “My sandwich, half a pizza, and chips.” Now I wish I had asked what the kid who traded half the pizza got for it. Often one student will trade a main entree for a treat out of another student’s packed lunch.

Two
I chatted with a friend about her experience eating school lunch as a kid. She’s originally from Montana. She told me, “Hot lunch was for the poor kids. I always packed. Looking back I’m sure it was made onsite and was fresh.” Later when she did get lunch money, she remembers using it to buy large cookies from the window. “When I got lunch money, I would either buy one chocolate chip cookie and a soup or two large chocolate chip cookies. That would be my lunch. In high school it was open campus so I went out for fast food every day. My mom gave me $2 per day and I could get something at Hardee’s.” She is now a vegetarian so I found it surprising that she ate fast food every day.

At my high school, only seniors were allowed to leave for lunch and I did go out and get fast food. That was the only time in my life that I ate a lot of fast food. I was a student athlete so I’m sure I was burning those extra calories off too. Of course I thought I was fat, but that’s another issue!

Three
Ever since watching Food Inc, I have gotten serious about packing my son’s lunch for daycare. Before I would send the odd entree to substitute or augment a lunch at daycare, but now that I’m worried about things I saw in the movie, I’m taking it up a notch and sending a lunch every day. For example, my husband and I reviewed the daycare menu and realized that there was more ground beef than we’d really like him to be eating considering we don’t buy beef at the grocery store.

Before when the menu read, “Ground beef, rice, bananas, carrots,” I would have felt great about that because I assumed there was minimal processing involved for those items. Now I think about I can offer even healthier options. Actually that was today’s menu for lunch at daycare. Instead I sent cut-up organic chicken sausage, organic yogurt with organic raisins, and a mini-salad of cut up snap peas, sliced carrots and a sprinkling of organic micro-greens (he thinks they are look like “hearts”). I also left a note saying that he could eat the rice and the bananas from the original lunch. Thankfully I have a really good eater and they tell me that he eats everything.

The chicken or fish nugget lunches are no brainers (as in he’s getting something from home), but tomorrow’s lunch at daycare lists  “cheese sandwich and tomato soup.” That is one of my favorite combos to eat and my kid loves soup. I’m going to have to decide tonight whether I try to send soup or let him eat theirs, which won’t be organic. My kid loves soup.

Here’s another issue: they tell me he wants to have the same lunch as his friends. They are patient with him and like I said I know he’s a good eater and likes what I’m sending, but he wants the same as they have. They said he wanted a bite of a chicken patty. Yep, I was shot through the heart. One of his caregivers said to me, “It’s ok? I gave him some.” I guess it is since he already had it! Just kidding, I love his caregivers and trust them. If he’s hungry and wants food, I don’t want them to deny him.

I asked, “Did he eat what I sent?” And they said he likes all of it. Things I’m sending are lots of rice stir-frys with chicken and fish (for the main entree), an fresh fruit like pineapple and asian pears from our neighbor’s tree (they asked us over to pick and we have a bounty) and fresh veggies like shredded carrots stuffed with hummus in mini-pitas, cherry tomatoes, organic peas, sweet potatoes as well as sunflower seeds. I even purchased organic, antibiotic-free chicken nuggets at Whole Foods for the days that they do offer nuggets and he wants to be like his friends. It broke me to buy them, but I thought it best to have them on hand.

What has surprised me the most is that I love packing his lunch. At first I thought, what a hassle! But now I get pleasure thinking about him eating what I prepared for him. This is going to sound so sappy, but I get choked up thinking of him biting into a cherry tomato and saying, “suck seeds out!” (he is in the stage where he describes everything he is doing while he is doing it) or crunching on shredded carrots. Sharing a love of food with your kid is rewarding. I love thinking about him eating. He just started asking, “Dat good, Daddy?” and “Dat yummy, Mama?” when he is eating dinner and it’s just darling. He makes me smile. Food is personal and it’s lovely.

Thanks for all the great comments on yesterday’s post. I didn’t even state the obvious: chips AND fries! I know!

Regarding educational reform, I wanted to acknowledge a comment where someone described how hard it is for a teacher with a significant number of years in the system to just leave and go to another district. That’s because other districts may or may not recognize your previous years of teaching to give you credit for them.

The cut off that seems to be sticking in my brain is five years. Any school district will credit a teacher five years of previous teaching on the pay scale (but of course no “tenure” in the new district). But if a teacher wants to leave a district after 10 years, it’s possible that a teacher would lose five years of credit in another system. I don’t know enough about that to be an expert (do please fill me in), but I think that is part of the problem.

We all have to work together to solve (and save) education in this country…for all kids.