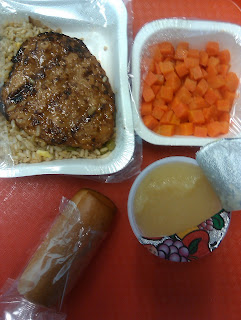 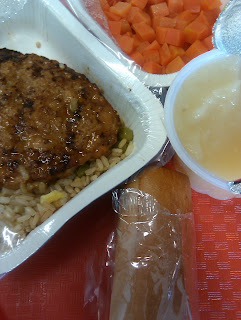 Today’s menu: chicken teriyaki, rice mixed with peas and eggs, carrots, applesauce, breadstick
I cleaned my “plate” today — I was so hungry. I took a bite of the chicken patty and my mouth recognized something familiar: there was a real chuck of chicken in my patty! I took a picture (below). I don’t remember the last time I had chicken teriyaki if it was like what I ate today.
I can’t tell you how excited I got when I tasted real chicken. The rest of the chicken patty did seem to be more uniform in texture and taste, but I think that there was more than just one bite real chicken in the patty! Yippee! 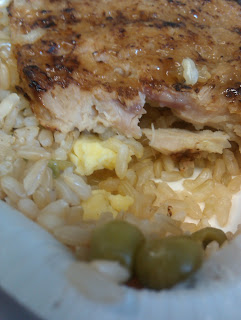 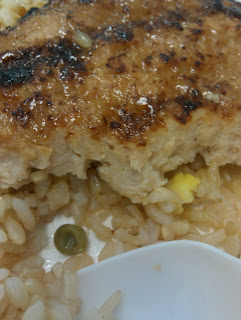 The consistency of the rest of the patty seemed to be more uniform
The carrots were a little on the mushy side, but that’s ok. The applesauce definitely was unsweetened and really tasty.
Notice the breadstick is there because of the two grain requirement (rice + something else), which is directly from the USDA meal planning patterns (not the lunch ladies or even the nutritionists at the district level). 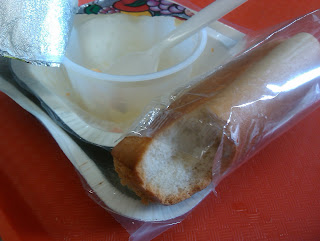 I ripped off a chunk of the breadstick 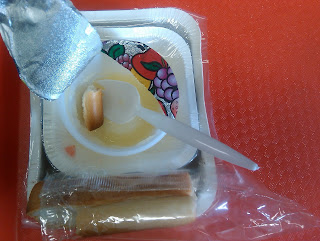 But I couldn’t eat it

Over the weekend I watched Food Inc. Many of you have encouraged me to see it for months. My husband even watched it a year ago by himself (I went to bed early). Here’s why I hesitated to watch the movie:

1) I watched The Future of Food with my husband a few years ago and I was depressed for days. I was so sad about the farmers and the seeds. I felt helpless. I didn’t want to sit around feeling hopeless again.

2) I thought I already knew everything Food Inc covered. Like I said, I watched The Future of Food and I don’t eat fast food and make healthy choices at the grocery store. Didn’t I already know about industrial food production? Wasn’t I already doing enough?

If those are the same reasons that you are holding out, I encourage you to watch the movie. We have a Netflix subscription and so I was able to stream it for free over the computer (huge perk of Netflix).

I’m not going to go over too much of the movie in case you haven’t seen it. I’d just like to quote some of the statistics presented in the movie. While I was watching it, I tweeted some of the quotes that hit me hard:

Quotes from Food, Inc
(and Michael Pollan in the movie):

My key take-aways were:

1) Vote with your fork. If you can buy organic, you should try to do it as much as your budget allows. One example in the movie was Stonyfield Farms. Every time you purchase one of their products you put dollars toward sustainability and not to mention a high quality yogurt. Even Walmart was in the movie and you already know that I don’t shop there. Their top executives stated that they do what the customers want and when their customers wanted milk that was hormone-free, they changed to provide hormone-free milk. When a large purchaser like Walmart radically changes its buying patterns, it moves mountains in food production.

2) It is food policy that is driving a lot of our country’s food problems. We need to stay on top of what’s happening in Washington DC with the FDA and the USDA. Many of you have commented already about how government subsidies have a big role in what we are eating and as an extension what I am eating at school. Well, I dismissed that as too esoteric for me to fully grasp. Food Inc showed me the connections between government subsidies and what they are doing to the entire food system of our country.

Watching the movie has changed me. I’m really happy I did and thankfully I’m not depressed. I was sad at moments during the film, but I feel hopeful. Have you watched Food Inc and, if so, what did you think?