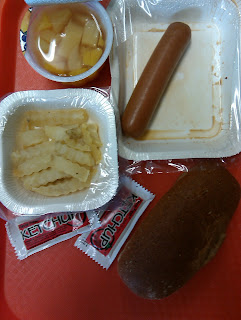 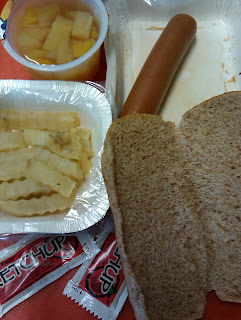 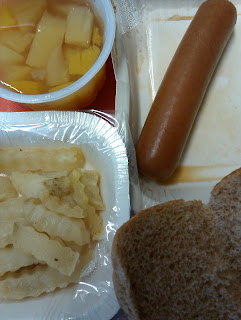 I ate the hot dog. I don’t think there is anything inherently wrong with a hot dog. (Edited: I don’t think there is something wrong with eating the occasional hot dog during the summer. Hot dogs are processed foods and should be eaten in moderation.) Oddly I think of hot dogs as a “seasonal” food: it’s something I only eat over the summer or if I’m at a baseball game. Note: I did not eat a hot dog this summer for what it’s worth. Outside of school I am eating healthier than I ever have before in my life and I expect it to continue well after I stop eating school lunch.

It’s really hard for me to eat a hot dog is when it’s the winter. It just feels wrong to look outside and see snow while taking a bite from a hot dog. It is also difficult to eat a lunch like the one above when I’m sick. Thankfully I have finally gotten over my latest terrible illness so I choked everything down.

The fries are best described as “flat.” They disintegrated into mush in my mouth. Thank goodness for ketchup. I drank the fruit cup just like the kids do. 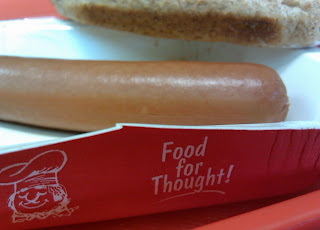 The first part of this week I was at a conference and so I didn’t eat school lunch. It was a transformative experience that I’m still processing. I’ll probably do some kind of a wrap-up in the future…way in the future. 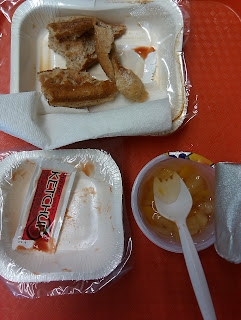 Thanks for the interesting comments about my dad’s “devil’s advocate” viewpoint. He’s a quirky man. I chatted with him about his email on the phone tonight and he clearly still doesn’t get it. However, what I have found with him is that his brain needs to “marinate” new ideas. I can’t expect him to change right away. I’ll keep up updated.

Recently a follower on Twitter alerted me to an article: Lunch Ladies Fight Back. The article has two parts. The first part takes quotes from a speech by Ms. Hayes (School Meals that Rock) who guest blogged in June. Ms. Hayes blasts Jamie Oliver saying he did it for his celebrity and also says that chocolate milk “has a little extra sugar” and so she’s for chocolate milk in schools. Her speech was given to school nutrition directors, kitchen managers and cooks.

Didn’t Jamie Oliver already achieve celebrity status prior to launching “food revolution?” I don’t see how he had any real incentive to take on a school lunch “food revolution” as he already had TV shows and cookbook sales to live off of. He could have just continued doing what he was doing, which was going quite well for him.

The case against chocolate milk is clear cut: 8 oz chocolate milk = 8 oz white milk + 3 tsp sugar. Added up over the course of a school year that is 5 lbs of fat. Ms. Hayes argues that low-fat chocolate milk makes it ok. But extra sugar makes you fat because the extra glucose is processed by the liver, turned into fatty acids, and then stored as adipose (fat) tissue around your middle. Extra glucose also = extra insulin. As a parent I’d be really upset to learn that my kid drank chocolate milk every day at school. Chocolate is a special treat only. What’s wrong with white milk anyway?

In the second part, Ms. Houston a director of food services from Corpus Christie said “Tray Talk” from the School Nutrition Association (who also guest blogged) is a great counter balance to Fed Up With Lunch. Ms. Houston called my blog “quite negative.”

Alrighty, well, I guess ya’ll have been reading the blog!

About the lunch ladies fighting back? Against what? me? I love my friends/coworkers who are lunch ladies. They are sweet and kind to me and the students every day. They need to be valued! The quality of school lunches is not a reflection of them. We’re in this one together.

I did recently get an email from a reader who told me that reading my blog did make her depressed and would I please write a positive post? I told her I would and I’m working on something. However, on a daily basis it’s hard to jazz up the blog posts. This is grim reality through my eyes. My students and I are eating those meals. Who is ready to join us and eat up? I think I hear crickets…