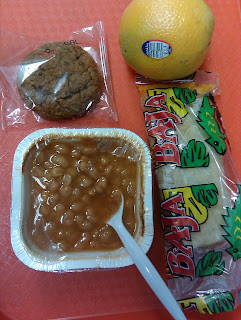 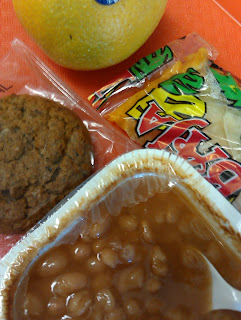 I was given a choice of cheese sandwich (whole wheat bread!) or quesadilla. I decided on the quesadilla because I had never eaten one before. I think it was a good move. The cheese didn’t seem to be as processed as the stuff in the cheese sandwiches I ate last school year. I know that yellowish orange cheese doesn’t necessarily mean less processed, but somehow it seems more natural than the processed cheese sandwiches. And it tasted ok too.

I’m a baked bean fan so they were fine. Still bummed the oranges aren’t sliced up for the kids to eat quickly, but you know I think it’s because there really isn’t that much prep space for that and I wonder if they even have the manpower to chop them.

I had a student puke today though it wasn’t related to school lunch. Puking from illness on the second day of school? That’s gotta be a record!

Getting back to the subject, overall not a bad lunch…compared to others….

Hello to all the new readers! Let’s see if I can answer your questions. First, I came up with the idea for the project last year in December when I was working on personal goals for the “new” year 2010. So I am eating school lunches in 2010 so the project awkwardly includes parts of two school years. If I’d had any sense I would have done it over one school year, but it just shows you how un-premeditated the project was.

I still maintain that I couldn’t have done it over one school year because summer break was necessary for my stomach! We also get to see if the meals get better this year compared to last year. I can tell you that the menu looks very similar to last year, but I noticed that many breads and the pasta are specified as “whole grain” instead of white bread like last year.

For those of you new to the USDA regulations, more than two grains per day need to be offered (and those who know better please do correct me – I’m getting fuzzy on this one. The USDA rules are convoluted). So the cookie is the second grain. I guess I’m happy to see the “oatmeal” cookie over the “chocolate chip” cookies of last year. But I do not consider it a grain…hmm… Pizza counts as two grains, which is odd. And sometimes meals randomly include pretzels again to satisfy the extra grain requirement. There is a method to the USDA madness however obscure it may seem.

Some of you commented on the abundance of packaging. That’s part of what shocked me when I first saw these meals. That was not my experience with school lunch as a child. I thought that maybe this was just my district doing this, but in talking to other people I have found that the company that serves these meals is national. A lot of kids in this country (mostly East Coast though, right?) get their food in these odd containers.

The reason? Their school doesn’t have much of a kitchen. Everything is brought in frozen (95% of school food is brought in frozen nationally) and then heated up in massive ovens. Staff has been slimmed as real cooking gets cut from the budget. Aside from the packaging, the food is the same stuff being served all over this country to kids in school. Poor kids and rich ones eat food like this every day.

To the “old” readers, thanks so much for hanging in there with me! I’m back in the groove at school and loving life. Let’s finish out this year of school lunches! Yee haw!

(NOTE: This post has been delayed because the screams of an unhappy toddler…probably getting sick yet again…my poor baby)