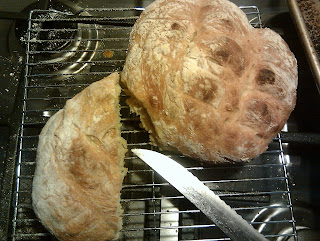 My first loaves (above), it doesn’t look that appealing, but was fantastic. 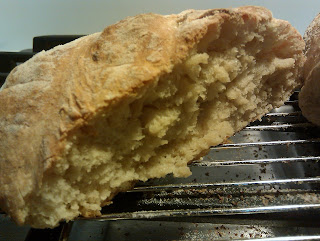 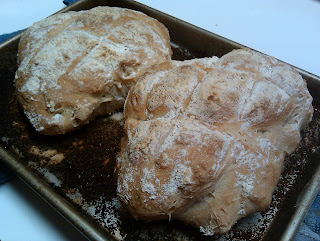 The second two loaves (that’s flaxseed meal in place of
cornmeal — it got toasted), one went to Grandma’s house 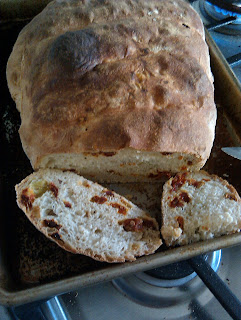 Sun-dried tomato bread for Mr. Q
I can make my own bread. It’s quite the shock for us all. And I love it. There is something magical about holding my own bread in my hands. It’s heavy and takes up space and I did it. The best part is handling the raw dough and forming it into something.
I bought Artisan Bread in Five Minutes a Day after the guest blog post about making bread at home. It sat on the shelf for months.

It’s so easy to make bread. Who knew? I even impressed my own grandmother. I brought her a loaf and she was dumbstruck. “You made this?” I felt so proud when she told me she loved it.

I didn’t realize when I bought the book that it recommends that you have paraphernalia including a “pizza peel” and a “baking stone.” The authors say it’s ok to bake the bread on a flat cookie sheet. You can see in the pictures above, I have one small cookie sheet with big edges (I have a small oven). It looked like I was doomed to fail right from the start.

The authors also recommended an over thermometer to make sure that your oven is cooking at the temperature it says it is. Well, I don’t have one of those either. I just figured that if I was going to fail at making bread, at least I could blame it on the lack of proper equipment!

So I followed their recipe until I saw they required cornmeal for the bottom of the bread. I know that at some point I had cornmeal, but it was nowhere to be found. I did have flaxseed meal though so I thought that could work instead.

I guess you could say their standard bread recipe is idiot-proof because I MADE BREAD. It was a watershed moment. I wish I could say that I will never buy another store-bought loaf, but with school back in session and the blog project very much underway, there’s a very good possibility that my new-found bread-making skills will go under cover through the end of the year.

Truthfully the only hard part of making this bread is it takes a little time: you have to have time to let it rise for two hours. This particular recipe doesn’t even require kneading. And don’t forget to put a cup of water in a dish under the baking bread (because it creates steam that helps bake the bread).

My bread only has five ingredients (water, yeast, flour, salt, cornmeal) compared to the store-bought loaf (I realize that some of the ingredients enrich the loaf with vitamins): 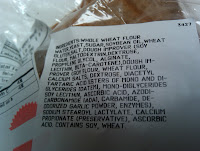 Here’s the exact recipe I used (I found it online) from the book, but I own the book (see below picture). In fact, here’s a look at just one shelf of the cookbooks I own. I must own about 30 cookbooks (I buy them both new and used, but also receive many as presents as it is an easy gift for me). It’s an indulgence to have this many. I love to cook, but lack the skills to “wing” anything or “tweak” something…so I need recipes, right? But I had never baked bread until this summer… 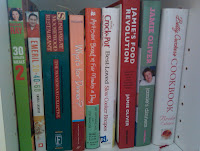 I have made the original/basic bread recipe a few times, but I also made the sun-dried tomato bread (pictured), olive oil bread, and jalapeno bread. I should do a cost calc on the bread, but it is very, very cheap. I still have tons of flour, yeast and salt left.
I’d also like to say that I’m only an ok cook, but that baking has always been a strong suit of mine. I prefer baking a casserole-type dish than to frying something on the stove. Baking bread is a perfect next step for someone who is a competent baker. If I can do it, so can you!