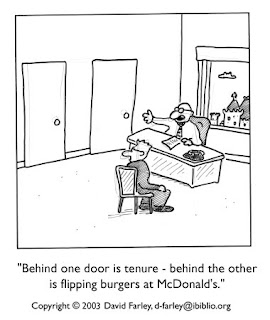 I hear a lot of nasty things in the media about bad teachers getting “tenure” and then it’s impossible to get rid of them. I’m not sure anyone has any idea how tenure works in public schools (it’s not professorial tenure in a university). I’m going to endeavor to define what it means in my district.

There are procedural rules governing what a principal must do if he/she doesn’t approve of a teacher’s job performance. The teacher must be observed (at least twice in my district I believe) and warnings must be given. Those are similar to rules set forth at a corporation where a warning is given in the presence of a representative from human resources and a time limit (usually 30 days) in which improvement must be seen.

At least in my district, “bad” teachers can be fired. It requires a principal to do more than usual: observe a few extra times, give a warning, etc. I’m not a principal but from what I can tell it’s not that hard to fire any teacher but there are steps that I have to be taken in a proper order. If not, then a tenured teacher will be able to fight the firing. Honestly I have not seen a teacher tenured or untenured fight a firing. I mean, why would you want to stay if you were asked to leave?

I believe it improves teacher morale when under-performing teachers are not given “a pass,” but instead are called on to improve by a demanding principal. It makes the school better and improves the learning environment. I also believe tenure as it is defined in my district is a good thing. If a teacher works somewhere for four to five years or more, he/she should not be let go without having an opportunity to discuss it with the principal.

16 thoughts on “How teacher tenure works…”