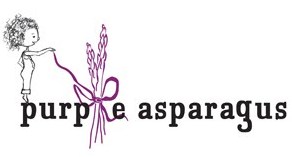 Melissa Graham, a former attorney, is the founding Executive Director of Purple Asparagus, a non-profit dedicated to bringing families back to the table by promoting and enjoying all the things associated with good eating, eating that’s good for the body and the planet. Purple Asparagus teaches families and children about healthful, sustainable eating in schools, community centers, and farmers’ markets in Chicago’s neediest communities. She speaks and writes regularly on sustainability both as The Sustainable Cook for the The Local Beet.com and for Little Locavores. She tweets @sustainablecook.  When she’s not in the kitchen or the classroom, you can often find Melissa shopping at the Green City Market where she serves as the membership chair.

Melissa is busy planning Corks N Crayons, an annual benefit for Purple Asparagus. Readers can purchase tickets to attend and/or buy items from their online auction.

I’m sure that this blog’s regular readers will remember Mrs. Q’s recent post criticizing McDonald’s ad campaign, which insinuated that its Egg McMuffins are pure and unprocessed. I read this entry with great interest, especially the comments that followed it, many of which were quite critical of her description of the fast food giant’s offerings as “utter crap.” See, my family also does not frequent McDonald’s, or least not any more. Our rationale, however, is a little different than Mrs. Q’s and I wanted to share it given some recent developments at the USDA.

Like many of us, I have a long history with McDonald’s, the ubiquitous American corporate icon. As a child, I looked forward to my pre-baby sitter trips on my parents’ date nights. I certainly didn’t shun it in college – it was a pretty good alternative to the dreck served in our cafeteria. Even up until last year, there would be an occasional visit when time and alternative options were scarce.

Then why have I made a conscious choice to shun the golden arches? It’s not that it serves fast food. A meal is not bad simply because is served at a drive-through window. My problem isn’t even that most menu options are high in fats and sodium. There are dishes served in the toniest of restaurants that share a similar lack of nutritive value. I believe that it’s important to teach and exercise restraint, and that there is a place for “sometime” foods, like cupcakes, ice creams, and fries. It’s not the taste either. Call me pedestrian but even now the thought of a McDonald’s cheeseburger with its soft, squishy bun, melding with the raincoat yellow cheese, speckled with tiny raw onions and ketchup mixed with mustard fills me with nostalgia. And the fries? Don’t get me started on the fries. Blond, crispy sticks sparkling with salt – they sorely test my willpower. Instead, my beef (pardon the pun) with McDonald’s and similar establishments is the meat that they serve, how it is raised, and ultimately how that will impact us all.

Anyone who’s read anything by Michael Pollan knows that the conditions under which the meat raised for McDonald’s and most other fast food establishments are deplorable. The animals are housed in large scale factory-like operations with little room to even turn around. Propped up by cheap corn subsidized by the U.S. government, the meat industry owes a huge debt to society that it will likely never be called upon to pay. These concentrated animal feeding operations pollute our environment, contaminating our water supplies when manure “lagoons” (a euphemism if I’ve ever heard one) break or leak. The environmental degradations, coupled with the poor treatment of the animals, have always given me pause. However, it wasn’t until I learned of the toll that the livestock industry is taking upon the effectiveness of antibiotics, that I truly changed my eating habits.

Between 70 and 80% of the antibiotics used in this country are given to animals raised for food. While some of these drugs are given to sick animals, the majority is provided either preventatively (i.e. so that otherwise healthy animals will not get ill under the wretched confinement system that they are forced into) or as sub-therapeutic doses to help the animals gain weight so that they can reach slaughter sooner. The livestock industry has sought to downplay research connecting the antibiotics used in livestock production and resistant bacteria that infects individuals working with these animals. The industry maintains that because this relationship is not proven with absolute certainty, the government should require it to reduce their antibiotic use. (Whatever ever happened to the precautionary principle in science?).

I recently reviewed a book called Superbug: The Fatal Menace of MRSA (methicillan-resistant Staphyloccus areus), which documents the spread of this virulent strain of antibiotic resistant bacteria. Author Maryn McKenna details real life examples of its devastating effects: necrotizing pneumonia, puss-filled abscesses that will not heal, and worse, healthy children dead within days after being exposed to it. While the livestock industry is not the only antibiotics abuser, it is one of the largest offenders and we are complicit in the abuse by our seemingly insatiable lust for cheap meat.

Before reading Superbug, the question of confinement raised animals was an ethical one for me – whether the misery inflicted upon animals and, for that matter, the humans working in those facilities by the putrid conditions outweighed the need to eat cheap meat. Even the environmental degradation resulting from the inevitable careless management of CAFOs seemed a distant and intangible casualty. For me, Superbug has changed the argument from one of ethics to a moral imperative. In every hamburger of unknown origin, I see the lives wasted by the failure of our antibiotics, a failure that we can curtail by making better food decisions.

Certainly, McDonald’s is not the sole offender. We can look to any number of fast food establishments and high end restaurants that refuse to buy better meat. I, in fact, have become a vegetarian in establishments whose meat is of unknown origin to me. But McDonald’s certainly has the most power and influence. If it were to demand better quality meats free from unnecessary antibiotics and hormones, we would see a real sea change in this country. Since I don’t see that happening given the Golden Arches’ financial obligations to its shareholders, we need to speak out. If we don’t, we may soon reach the end of antibiotics and the 20th century wonder drug will be powerless to protect us and our children.

To learn more about this issue and to make your voice heard, visit Keep Antibiotics Working. In particular, there is a good possibility that the FDA will weaken a regulation to make it even easier for veterinarians to give antibiotics to food animals on industrial farms. And, while a recent FDA draft guidance document on antibiotic use in food-producing animals states that “using medically important antimicrobial drugs for production or growth enhancing purposes in food-producing animals is not in the interest of protecting and promoting the public health,” the document only recommends measures to curb some overuse of the drugs. Visit Keep Antibiotics Working to tell the FDA and the White House to stand up for human health and end the misuse and overuse of antibiotics by taking a stronger stand against the overuse of antibiotics.