For 15 years, I worked as a teacher and center director at two of the largest child care providers in the United States. Although you might think that the nutrition in child care and preschool centers is much better, you are not correct. Early childhood is the time of rapid development, discovery of the world around us and the time when most kids are just beginning to figure out who they are. It would make sense to have well rounded, healthy nutrition in the countires preschool and child care centers but unfortunately, it is not.

One of my daily challenges as the director of a child care and preschool center was maintaining a budget. Just like those cafeterias in the public school system, it is all about the budget. Athough it was my job to stay on budget, I often felt guilty with what these kids were fed. State licensing laws in California mandate that the children are fed a daily mix of protein, fruits, veggies and dairy products but there is not a set limit on calories or fat levels.

In order to maintain a budget, you have to go with what is cheap. Since your monthly budget in a preschool is based on the number of children you have enrolled, so it pays to have a school that is as full to capacity as possible because that will give you the “extra” money for not only supplies like crayons and markers but also food. When I ran a school that was close to capacity (I had 125 children enrolled and school capacity was about 145), my menus were full of yummy treats like green salad, pasta salad full of fresh veggies, homemade favorites like lasagna and BBQ chicken sandwiches. We also had homemade cookies sweetend with apple sauce not sugar and kabobs with fresh fruit. It was easy to make healthy choices for the kids and in three years, I never had a complaint about food and often parents asked for recipes we served, to make at home.
In contrast when I was assigned to a struggling school that had an enrollment of 50 or so (capacity was about 165), there was no way to stay close to budget and be nutritious. I was not the director but the assistant director and most days, I would not even eat the food. It was everything on the cheap, chicken nuggets, fruit cocktail in heavy syrup, packaged cookies and sometimes a trail mix of dry breakfast cereals and juice for snack. At one point the director even ordered the cook to serve either fruit (it was the canned kind in heavy syrup) or veggies because it cut the cost of each meal to a more manageable budgeteed amount.
In both cases this food is served to all children that eat table foods. So babies that don’t have food sent from home are fed the same meals and staff simply finely chop the foods for them to eat. So little ones (around age nine months of age or so) were eating processed, sugar-ridden foods before they were even one year of age. Now on the outside looking in I realize how crazy this is! My own son was in the young toddler program and had many problems going to the restroom, sleeping and even having good behavior. I think now that it was not only the environment but also the food that he ate daily while in care.
Parents with young children should investigate the salt, sugar and fat content that their infants, toddlers and preschoolers are eatting. I think that they would be shocked! No child should be eating that much fat and salt laden, processed food at one year old. It is sad to see our littlest people being taught that chicken nuggets, fruit cocktail and crackers are suitable lunch and that juice is the only beverage of choice unless you are eatting lunch.

Our children’s poor nutrition starts young, too young. The cycle is created for many when they are not even old enough to talk. Parents need to rally in all areas of education and care to meet the needs of our children to teach and facilitate healthy nutrition which is something that can stay with them for a lifetime. 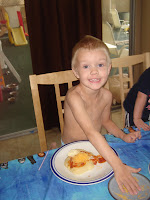 When I left the child care and preschool industry and became a stay at home mom, my son who was about one and a half, also left care. During this time he had a lot of problems sleeping, was almost always constipated and often in care was “wild” for no apparent reason. Once he was at home with me, things changed. He got homemade meals everyday, was limited on sugar and was given choices. His choices were often carrots or green beans or a choice of low fat ranch dressing or tomato sauce for his chicken breast. When I saw that he was actually learning to make “healthy choices” as well as think independantly it made something click inside. Maybe all his issues were based on all the processed foods, sugar filled foods he was served in preschool and insisted on eatting at home. Maybe I was not only changing his diet but teaching him how to make better choices when it came to food.
This made me make some changes in our whole family’s diet. We are not rich, not by any means but we found a way to always include fresh fruit, freah veggies and lean proteins in our shopping every week. We changed to whole grains, we cut out salt, switched to lean turkey and chicken instead of beef and even added in more fish to our diets. Our son fell in love with our morning breakfasts of egg whites with sliced tomato or steel cut oats topped with strawberries, blueberries and cinnamon. He started asking for salmon and the “tan rice” (brown rice) for dinner. He refused to eat the chicken nuggets, fish sticks and processed foods the other kids ate while at play dates. We even switiched kid favorite like jelly/jam, syrup and lollipops to sugar free types. We started having salads a few times a week as a main dish and ate high carb things like pasta as a side dish rather than a main dish. 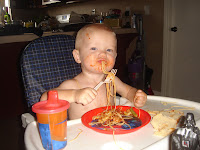 Our son’s behavior changed as well as his sleep patterns. He also began to have regular “movements” that were normal and didn’t make him cry. When our second son was born and started to eat table foods we commited ourselves to even having his rice cereal be whole grains. We thought if we did that, we might never have to “recondition” him as we had with our oldest.
It actually has not made that big of an impact on our budget. We eat seasonally, or in some cases such as blueberries, buy frozen. Looking back on our diets both the one our oldest ate in preschool and the one that our family ate I realize it really was not that hard to make a change. This does not mean that we have never again eaten Mickey D’s or had ice cream but when looking at the whole picture, we have made a BIG change. It has made us all healthy and our kids now make much better choices when it comes to food.

Today’s guest blogger: For over 15 years I worked in the preschool industry as a teacher, infant care provider and eventually as a center director. I learned a lot from the parents, children and educators that I worked with over the years but now have moved on to raising and teaching my own children at home as a Stay-at-Home Mom (by far the hardest job I have ever had). I enjoy sharing my knowledge of the preschool world with everyone I can and currently write a blog called Preschool Mommy and am a Featured Parenting Contributor on Associated Content, a local writer for Examiner on the topics of Motherhood and Preschool and write on occasion for the AOL site Holidash.