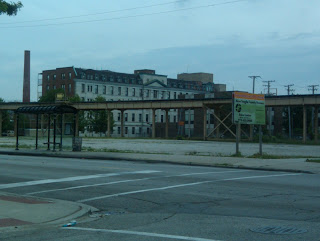 The “L” tracks nearby
Each summer camp session at Common Threads is three weeks long. I volunteered the first two weeks and then I took a vacation so I missed the third and final week of that camp session. So when I showed up today, it was to a completely new group of kids, a new chef, and more volunteers than before. From what I had observed before, I had been the only volunteer during my particular afternoon for the first session. Today I noticed two other volunteers.
Another new chef introduced herself and informed me that this second group of campers had participated in cooking camp last summer. She commented that they were “pros” and would be more able to be self-directed with their work in the kitchen.
I was paired with the other volunteer and we were assigned to run a station ourselves. It was nice to work with another volunteer and we complemented each other nicely. She was far more organized than me as she had received formal chef training, whereas I have had more experience with school kids.
The kids assigned to us were focused and eager. Two girls started chopping zucchini and I told them both that I thought they looked like professional chefs in their precision and dedication to task. The other two kids were measuring spices. The chef had told us that the spice level in the earlier group had been a little too hot. She suggested halving one of the spices. I asked the kids a very hard questions, “What’s half of 1/2 teaspoon?” I know that kids their age (Fourth and fifth grades) learn fractions, but they seemed to be a bit rusty on identification of fractions. I couldn’t find a pen (I’m bringing my own next time) so that I could draw out the fractions and they could see them visually. I used my hands to describe various fractions in an impromptu math lesson.
The recipe for today’s session was the same as the first week I participated, the falafel, Kushari and the Dukkah encrusted salmon. I was on the Kushari team again, but we were also going to be making the salmon and the Amba so that was a nice change.
The chef was correct about the kids: they had participated in camp before and were indeed “pros.” There was not as much jumping around and getting excited as the previous group. They were poised at the cutting boards to the point that if they had been older, anyone would have thought it was culinary school. These kids were chopping machines — they had serious knife skillz!
The onions were strong and when the kids were chopping them, many had to step away from the table and wipe their eyes. Even the kid next to the girl chopping onions had to step away. Potent!

The recipes for dishes like Kushari are long. As I said earlier, the toughest part is the prep and chopping. When you are working with four or five kids, the prep is quick. At home a recipe like this would take me much longer to do mostly because the prep alone would take me at minimum a half hour if I was minding my toddler simultaneously. I like Common Threads’ approach because it teaches kids basic cooking skills that can be applied to any recipe. If I were running this program, I might try to water it down by attempting less complex recipes. What I like is that the kids learn not to be afraid of long ingredient lists and multiple spices. Often at home when I am looking through a cookbook for a dish, I’ll skip recipes with “too many” ingredients. I believe that the kids at camp learn not to be intimidated. Leaving the program I think they feel a lot of confidence about themselves and their abilities in the kitchen.

Two hours in the kitchen sounds very long for kids this age. It flies by as the camper learns new skills, has fun, works at the stove, and then eats. There is time to socialize with the other campers. Once I saw two girls spontaneously start doing a hand clapping game. Many of the kids are meeting new people and making new friends. They come from different schools and include people of all different ethnicities including African-American, Asian, Latino, and Caucasian, mirroring the diversity in their communities on the south side of Chicago. I love how the creed (what they read before they eat) ties into their experiences with the food and also with other campers.

Having a competent chef volunteer as a partner made my job easy. The kids worked together to finish the Kushari and the salmon. I carried around the recipe and provided guidance when necessary. I didn’t work at the stove this time, but instead helped with the clean up. The kids have jobs in the kitchen aside from ingredient prep, stirring, baking and cooking at the stove. Each station is a color and every week they rotate clean up responsibilities. This week my group had to set up the station to eat and sweep the floor. Other groups helped to wash dishes (not the knives or graters which are put aside for the hired kitchen help) and wiped the counters.

One of the stations was cleaned off and that was where we stood and ate our creations. The kids set up small paper bowls, paper plates, and spoons. I noticed that the spoons were bio-degradeable. Then I stood at the stove and helped dish up all of the kids who came through with their little dishes. We read the “creed.” They have to eat a little of everything and if they like it they can come back for more if there is any. I saw all the kids eating and some came back for seconds. I chatted with some of the kids and they told me they wanted to try some of the recipes at home. Another successful afternoon in the kitchen!

6 thoughts on “Common Threads volunteer: Week 3 in the kitchen”