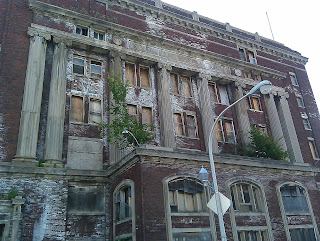 I drove around Englewood and saw this broken down old building.
It says on the top “South Side Masonic Temple.” So sad to see it in this state.
This is NOT affiliated with Kennedy-King College, which is a stunning facility
that is basically brand-new. But this huge, sad building is within sight of campus…

I arrived at the door of the kitchen and before I could wash my hands one of the kitchen managers gave me an order to lift something and put it somewhere. I want to say “thank you,” because I like being told what to do instead of trying to figure things out by myself. The last week I was assigned to the bigger side, which included four large kitchen stations bordered by massive stove tops, a bank of ovens, and big refrigerators. This time I was informed that I’d be on the smaller side with two kitchen stations and only one set of stove tops. It seemed like the kids were bigger at my new assignment. I was a little bummed to be working with a different set of students and missing out on talking with “Joe” again.

I was working with a different chef and again everyone was friendly and welcoming to me. I don’t know if I’ve watched too much “H*ll’s Kitchen,” but I was happy to find that the chefs working here were happy and welcoming. People thanked me for volunteering, which was not necessary considering the meager offering of my time. I was the one who should be thanking them for allowing me to participate! The chef started ordering me around and I told her, “I take direction well,” (which is code for “do please tell me what I need to be doing”). I love order.

During the first week of camp, Common Threads over-enrolls to compensate for children who drop out because they are unable to attend the camp. I noticed that there was more elbow room on both sides of the kitchen today in comparison to the first week. Looking around I noticed that “Lou” wasn’t back. I’ll never know why he wasn’t able to stay for the whole camp experience. This week things were more organized as the kitchen staff had perfected a routine of movement. I liked the harmonized bustle of the kitchen and enjoyed observing the kids navigating their own routes around the stations, knowing their spots and roles. A part of me relaxed watching this dance and I started to enjoy myself.

My main job duty continued to be “don’t let kids cut themselves with knives” and then a new role was added at the stove “don’t let kids burn themselves.” Readers, remember when I blogged about how kids this age shouldn’t have knives? All together let’s laugh with me! Man, did I get schooled! Today’s menu was from Brazil and included Lorco de Habas “Fava bean soup,” corn cakes, and fish kabobs. Both stations made the soup, but our station also made the corn cakes while the other station made the skewers.

“But I don’t want to chop garlic,” a student rebutted. So that student started chopping potatoes.

I hovered around the cutting boards and started correcting a kid who was chopping onions without the bear claw. “Bear claw,” I reminded and things were corrected. Kids want to go fast through tasks so one student had to be reminded to slow down. When kitchen is your classroom, your lesson is slow food.

Kids finished chopping quickly so then corn was shucked and sliced off the cob. I didn’t jump in to do something for a student, but instead I stopped them when they started to cut a wobbly cob. “Let’s put that one in the garbage bowl because there’s not very much corn left on that one.” Code for “don’t cut yourself for a few kernels of corn.”

The dress code for volunteers is closed-toe shoes, no short sleeves and no shorts. The kitchen was comfortable as it is air conditioned, but when I moved to work at the stove top to make the soup, that’s when things got warmer.

Making the soup was a breeze. The experience reminded me that soup making is not a big deal. The most time-consuming part is the prep. We started with some type of oil, chopped onions and garlic, and then start adding veggies and later the stock. A tall, shy girl became the stirrer (many girls this age are quiet). She stood happily and kept moving everything around on the bottom of the pan. We discussed what “translucent” meant in regards to onions. It’s amazing to see how the onions slowly change color as they give it up to the heat.

Frying the corn cakes proved to be more challenging as hot oil is a danger. The kids were the most excited about the corn cakes and so four kids crowded around wanting to help scoop out the batter and plop it in the pan. We struggled to take turns as one boy and one girl continued to monopolize the stove. I tried my best to make sure that all the kids who wanted to pour corn batter into the pan and flip the corn cakes could do it a couple times.

POP! A drop of oil jumped out of the pan and hit a couple students and me. The chef came over and noticed that little remnants of corn cake in the pan were getting hotter and hotter, which caused them to pop and spray us. I was mortified and worried that the students would have burns. Ice packs were located for the students. The chef cleared out the little burnt bits, informed me to watch out for those and cooking resumed.

A few minutes went by and the injured students returned to the stove continue flipping corn cakes. I was relieved that they healed fast and wanted to return to their jobs at the stove!

The soup was finished first, but the corn cakes soon followed. Everything was plated while the students left the kitchen for a lesson with their camp counselors. The chef and I sampled the soup. She had amended the recipe because the first round of students had complained that it was spicy. She thought it was still a bit spicy. I love watching a chef tweak a dish to make sure it tastes right. I think that’s a special skill honed over time. I have a low tolerance for spice so I am only a good judge of the presence of spice, not the degree of heat. I tried it and commented that the spice came on later and didn’t seem too potent. She made some adjustments and we started filling the small bowls.

The kids came back in, the creed was read, and then everyone ate. The corn cakes were a huge hit with the kids and they also ate the soup and the kabobs. Another great afternoon in the kitchen!

13 thoughts on “Common Threads volunteer: Week 2 in the kitchen”