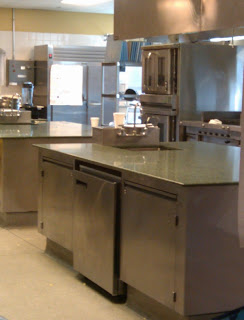 The smallest side of the kitchen with just two stations.
On the other side of the range, the kitchen goes on and on and on…
My journey started with a lengthy drive to Englewood, a part of Chicago which has one of the highest murder rates in the country…not a place I normally visit. I parked and walked into a large campus building part of Kennedy-King College. An attendant directed me down a hallway. I could hear little kids.
I came in right when the volunteer coordinator walked in too and we sat down in the cafeteria side with a terrific view of the kitchen through long, large windows. The kids were loud and happy moving smoothly through two very large commercial kitchen areas. Most were wearing matching shirts with Common Threads written on them.
I chatted with the volunteer coordinator about the program and I received an apron and a badge (with my real first name on it). The volunteer coordinator is a former teacher and a Southerner. What is it about a Southern accent to make a person feel welcome? She explained how the camp experience is focused on teaching basic cooking skills while making recipes from other cultures. Every day the campers spend two hours in the kitchen cooking. Another hour is spent in the garden growing vegetables they later incorporate into meals they prepare themselves (for example, Swiss chard). The remaining hour is a cultural lesson related to the region’s cuisine they will be preparing. They learn a cultural dance and/or craft depending on what is appropriate for the culture they ar studying. For the Southeast Asian week, the students did an hour of yoga. Finally each Friday they have a field trip. One Friday the students went to a farm (the Heritage Prairie Farm to be specific) — oh how I wish I could have come along! There would be campers that had never laid eyes on a farm. In fact, the cuisine that the students cooked up every day could be totally new to them as well.

We finished my orientation and I found myself feeling a little nervous about entering in the kitchen. The volunteer coordinator told me I was assigned to a group of the older kids (5th and 6th graders).

The first group of younger kids had finished preparing their meals and eating them and had moved into the cafeteria area for a group lesson with their camp counselors. There are two large groups that alternate — while one group cooks for two hours, the other group is either in the garden or receiving a cultural lesson. Then they switch. So the kitchen is always hopping.

I met the chef and the kitchen staff and at least for this shift I would be the only volunteer on half of the kitchen. On the menu: Eygptian food! Falafel with toasted pita bread, Dukkah encrusted salmon, Kushari (rice and lentils with veggies), and Amba (mango condiment). The kids have a lesson on a part of the world they may not have thought about before and then they cook that region’s food — and eat it!

As a volunteer my duties were to float around the four stations (two falafel, one salmon, one stew) and make sure that no one cut themselves. The chef commanded the Amba and salmon areas with a couple camp counselors and so I ended up basically parking myself at one of the falafel and Kushari stations where there were fewer adults.

Another reason I joined that group was that I noticed one of the more interesting students “Joe” was assigned to make falafel. I noticed him during the group lesson as the most outspoken and loud and I saw that he needed some redirection to pay attention to the lesson. That’s not to say he was not intelligent because he knew the answers to the questions posed by the chef. In fact, I noticed that when the chef asked questions about the previous day’s lessons, most kids knew the answers and I was encouraged to think they had retained that information (sometimes kids don’t remember things the next day). My personality and skill set often pushes me towards kids traditionally labeled as “troubled,” so I definitely wanted to be a support to the student if he needed someone.

The chef did a lesson on chopping an onion and using the “bear claw.” For the kids this was day two using this technique so when actually chopping they needed just a couple reminders. The kids also learned “the bridge” technique and later how to “plank” an onion. I never went to cooking school or had any chef training and so this was new information to me! I’ll never chop an onion the same way again.

I felt much older than the camp counselors…and I was. Most of the camp counselors are young, college-aged. The kitchen felt vibrant and alive with all the young people. I stayed focused on my main duty of making sure no one cut themselves by sticking close to the cutting board. There was a taller girl chopping an onion and she seemed shy, cautiously looking around. She was very good with the knife, but initially needed reminder to use the “bear claw.” I told her she had great knife skills. She beamed.

The kitchen was busy. Camp counselors were moving quickly around the station, gathering ingredients, and looking at the recipe sheets, which at first glance do look daunting (maybe not the falafel, but how often have you tackled Kushari in your kitchen?). These kids didn’t need a lot of help identifying ingredients and moved quickly making falafel after chopping the onions. The great thing about kids is that they just get in there and go; there isn’t any adult-like hesitation.

I started cleaning up an area and took a knife to the back sink where two girl members of the kitchen staff were washing the sharp objects. The large commercial sinks were crowded by kids washing prep bowls, garbage bowls, and spatulas. WHAM — the smell of the area immediate brought me back to college about 15 years ago when I washed dishes in the hot, dank basement of my college dorm. I wore a hairnut and sweated profusely for a year as I stood in the spray of the commericial dishwasher. I couldn’t help it; I had to back away from the dishwashing area. The flashback was too vivid.

I retreated to the falafel station and saw the kids waiting to use the food processor to grind up our chickpeas, onions, and spices. I moved to work with the students placing triangles of pita bread on massive sheet pans. They spread generous amounts of olive oil on them using a brush. It was my first chance to chat with two of the students including “Joe.” “Joe” and the other student “Lou” answered my questions about their schools and before I knew it they started talking about the violence in their community. “Lou” told me about a relative who got shot and he was really sad about it. “Joe” also told me about hearing gunshots outside his home. What does one say to a child when they tell you this information? Are there words? I only could muster, “Wow, I’m really sorry to hear that happened.” I felt that my response was inadequate, but I felt honored that they felt comfortable telling me something so personal and traumatic.

And then we just finished our task and the bustle of a kitchen took over. “Lou” carried the tray of pita bread to the oven and my eyes got wide as I worried he would drop it. Of course he did fine and even put it in the oven himself. “Lou” and I started chatting about his life and I asked if he had any brothers or sisters. He told me that he was an only child. “Lou” was a quiet, sweet boy with very large eyes who didn’t smile that much but when he told me that his mother was expecting and how excited he was to be a big brother, he smiled widely.

The rest of the session was clean up while we waited for everything to bake (salmon), to cook (Kushari) or to fry (falafel). The Amba just needed to be stirred. The camp counselors worked with small groups of kids by the stove (there wasn’t space for nosy volunteers). The kids did a great job putting everything where it needed to be, wiping surfaces, and dropping cutting boards into soapy water.

Another part of my job as a volunteer is to eat what we make. During my earlier training the volunteer coordinator told me that I had to eat everything even if I didn’t like something because the kids would notice if I didn’t eat something and might not want to eat it too. Well, I’ve got 101 school lunches under my belt so I didn’t think the food would be a problem for me! By the way, the kids have to try a mouthful of every item.

When everything was ready, we all gathered around and “The Creed” was read. Essentially the creed is a chant or poem read before the kids eat. It goes as follows:

Today we learned how people in another country live, and what they eat!
Today we tasted healthy foods and practiced eating well to keep us strong.
People all over the world–and even in this room–are different!

But we all have things in common:
We can work together, share together,
Learn together, cook together and then…

Together we can EAT!

I’m a sap and I got a little choked up when the group recited it. Then the kids, the chef, the camp counselors, and myself started serving everyone up. It took awhile but everyone got some. And the kids ate it and so did I: it was delicious. The spices and flavors were perfect. I made a point of asking “Joe” what he thought and he said he didn’t like the salmon, but I saw him try it and eat the other food.

15 thoughts on “Common Threads volunteer: Week 1 in the kitchen”