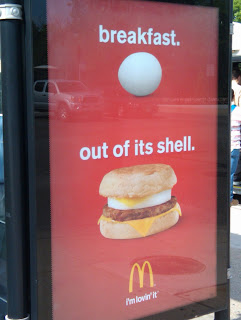 Is this a joke? It “hints” that its food is not processed. How an egg turned into an Egg Mc*Muffin took probably more than 137 steps including boxing, trucking, warehousing, and freezing. (Updated: McDonald’s uses real eggs cracked into a form) I took this photo of a bus stop ad, which was right in front of a grocery store. Go in a buy a dozen eggs if you want wholesome food.

It’s not a problem if you want to take your kids to McDonald’s. If you want to eat McDonald’s all the time or just now and then, do what is right for your family. Bottom line: you will not see the Q family at a McDonald’s. We think the food is utter crap. Additionally, my husband worked at a McDonald’s in college and that experience turned him off.

Readers have told me that McDonald’s sells their food inside of some schools’ cafeterias. I am truly blown away by that. I want more information. Have you ever heard of McDonald’s food inside of schools? I can’t find a darn thing about it online! Keep fast food corporations out of our schools.

Updated: I closed comments. The last one is my follow-up to this post.