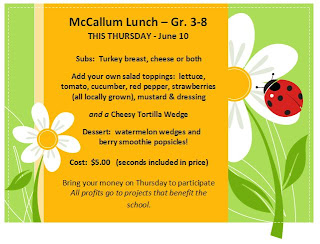 I am a parent of grade 3 and grade 5 children in a small city in Southwest Ontario.  At our school, there is no cafeteria, and children bring their own lunches from home.  Just like many other public schools, the parent council provides a lunch which is used as a fundraiser to help pay for extras. The school’s SAC – what you call the PTA in the US – serves lunches once a month to raise funds.  We use the money to buy playground equipment, additional library resources and other items not provided by the government.  When my oldest son started at the school 7 years ago, they always served hot dogs, pizza, chicken nuggets or similar processed food, accompanied by a packet of chips and a drink.  Children paid a week ahead of time, and it took the volunteers hours to tally the orders.  I think many parents all over the world will understand exactly what a drag that task is!  The rest of the time, every child brings a bagged lunch.  A fair number of children bring lunchables, koolaid jammers and the like.  Our school is probably typical of most Canadian schools with children from middle and low income families.

The school does have a small kitchen with a regular oven.  Over the years, together with the school’s other fundraising efforts, we have been able to add playground equipment, literacy materials, books and shelving for the library, and a whole host of other items that are typically not provided by government funding, and which help make the school special.  In the past seven years, I have seen the school grow from under 400 students to an anticipated 700 in the coming academic year.   This has caused us to rethink the way we organize our monthly lunches.  Let me explain:

I started volunteering 7 years ago when a hot lunch typically consisted of a hot dog, a packet of chips and a drink.  In a concession to changing nutritional demands, pop had recently been outlawed, but canned iced tea featured prominently until we replaced it with apple juice and flavoured water.
Periodically pizza or a purchased hot meal like restaurant chicken would be offered instead.  The amount of discarded cardboard and plastic on these days would be phenomenal.
A challenge that many schools face is volunteer levels, and ours was no exception.  Order forms would be sent out some 10 days before each lunch and a handful of parents would painstakingly tally the orders.  The first time I did this, it took me almost 3 days to balance the numbers and different combinations offered!
About 2 years ago things started to change fairly dramatically.  It didn’t seem like it at the time, but a confluence of factors caused us to turn the lunch institution on its head.  The school had grown by more than 50% and the number of regular volunteers had dropped.  We were spending an inordinate amount of time tallying orders.  Those of us who were still volunteering were disenchanted by the nutritional value of what was offered and we knew we could do better.  We started by eliminating juice and flavoured water from the menu, replacing this with milk and chocolate milk (more about this below).
We also split the school into two groups, serving the kindergarten students on a different day than the older students.  This year we added a third group, and we now serve hot lunches on three separate days a month.  This means the parents running the lunches come to school more frequently than before, but our catering has become largely stress free.  Most surprisingly, it’s all run by just 4 parents!
In a bold move that took some chutzpah, we did away with order forms altogether, distributing flyers to the students instead.   We purchased sufficient supplies to cover more than enough orders, and would go to the classrooms on the morning of the lunch to determine how many children would be ordering.
We also raised the price of the lunch to an all inclusive $5.  Students now bring their money, usually in the form of one bill, to the room where we serve lunch.  This makes the payment processing a piece of cake.
For most of the past academic year we have offered one of two entree options, both of which are very popular with our students:  macaroni and cheese that we make from scratch, or spaghetti with canned pasta sauce.  This would typically be accompanied by a fresh salad dressed with a ranch dressing we make with yoghurt and mayonnaise.  By buying the ingredients ahead when they are on sale, we have been able to achieve really good margins.  As one of our parents likes to say, “work smarter, not harder”.
This month we are offering subs.  This is a very easy meal to throw together.  We’ve been doing this long enough to know approximately how much to purchase.  All the produce is locally grown and the buns are multigrain, as are the oatmeal cookies.   Any extras are either frozen for future use or purchased back by parents and teachers so nothing is wasted.  We use plastic cups, disposable paper plates and real forks picked up for pennies at thrift stores.  It takes under an hour last week to prep the veggies and set up tables for the children in an empty classroom.   We slice open the buns and spread them with turkey breast or cheese, allowing the children to add their own toppings from three stations.
In the future, we would like to eliminate chocolate milk from the menu, and I have nothing good to say about North America’s penchant for bottled water. Not too long ago I had some donated milk which I distributed to several of the classrooms.  When I asked the children, “Who would like a glass of milk?” there was no shortage of takers.  I feel very strongly that most children will drink milk if it is offered to them.  We have put the drinks choices to the parents’ vote, pointing out that chocolate milk contains more sugar than the equivalent volume of pop, but it still won out.
When I look at how far we have come, I realize the discussion over chocolate milk and bottled water is not worth getting too excited about right now.  We have been able to turn the school’s hot lunch system from a fast food administrative nightmare into a slick, high-margin fundraiser that delivers great quality nutrition at a reasonable price.  The school year is almost over, and I’m sure we will be able to successfully tackle the beverage choices in the new year!