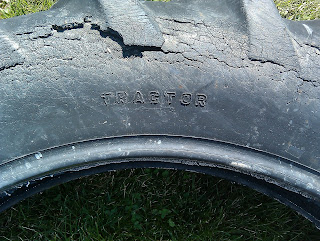 I have persistent fantasy of moving to a farm and buying a cow. It’s to the point that I often turn to my husband randomly and say, “let’s go buy a farm somewhere in Iowa.” He will occasionally indulge me and agree with a smirk, “it’s tempting.” I’m not sure if he’s being sarcastic. When my semi-rural dad first met Mr. Q (we had been dating a month) he told me, “He’s a fast talking city boy.” My husband fixes things around the house, has a terrific green thumb with houseplants, and gardens a little; it’s hard to say how he’d adjust to plowing. It would be tough for me, but sometimes I want to get away from it all.

I love living in the Midwest. But I’m not sure why “Iowa” pops into my head when I have more connections with other Midwestern states. I guess I just think of Iowa as a farming state. I also have the illusion that land is cheaper there and that our money would go “farther.”

My kid loves going to the farm. There is a small touristy (but functional) farm not too terribly far away and we go there more often than we go to the zoo. I wish every kid could have access to a working farm. There’s so many opportunities for learning as it offers a language rich environment (labeling animals and farm equipment, actions, cause and effect, etc). There are fewer animals in cages too. Not that I have a problem with zoos, but somehow it’s different seeing a domestic animal behind bars.

Actually the farm is quite possibly the perfect place for children under three. Looking through various park districts’ catalogs, there are tons of programs open to children three and older. But the little guys? Well, there is story time at the library and “play dates” with other mommies and kids, but for the under three set there’s “gymbor*ee” and that’s about it. Sometimes I feel doomed to letting someone run around at a playground, the pool or in the mall (admittedly there are few complaints).

For a toddler the farm is practically titillating! I mean, there’s poop and smells of unknown origins. Then loud “cock-a-doodles” coming out of nowhere to startle you. And cows with soft mooooos. The big wheels of a tractor to kick and try to climb. Little homeless kitties running here and there. My kid is in heaven.

It’s no wonder I want to move my brood to a different land, the land of raw milk and fresh eggs.

A reader emailed me and said that promoting organic food in schools is unrealistic. Um, duh. I would like to make it clear that I don’t equate fresh foods with “organic.” I’m not sure how that connection was made. In fact, I don’t remember even using the word “organic” in relation to school food.

I eat a lot of fresh fruit and vegetables at home, but purchasing organic exclusively is not financially viable for our family. Additionally it would be hard to do that just in terms of sourcing everything at the grocery store or even at the farmer’s market. I make sure to buy and eat the Ten Fruits and Vegetables To Buy Organic. That’s about it.

Just to be perfectly clear: a utopian world where all school kids eat organic food at school would be great, but I know that is not going to happen. What I want is a world in which my students aren’t eating 62 ingredient pizza and where tater tots and fries aren’t considered vegetables. I wonder is that too much to ask?