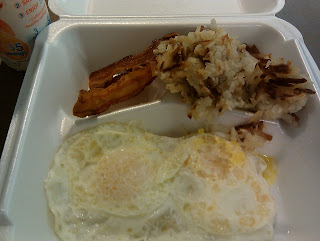 I fasted for more than 12 hours prior to my blood test this morning and then afterwards I went to the hospital cafeteria and ordered a standard breakfast: two eggs, hash browns, bacon, and an OJ. Cost: $4.15 Everything was delicious but I was starving so I could have been biased. It was your basic diner food. I noticed that they had available the cholesterol free egg substitute.

There was a real chef cooking (cheer!), but they use styrofoam and all plastic (jeer). There were no veggies out that I saw, but there was fresh fruit. I would have grabbed some but it was right then that I realized that they only take cash (jeer) and I was out. So I had to drop everything and run to their ATM. By the time I came back, I was famished that I just wanted to eat that I just paid as quickly as possible.
From my limited experience in hospitals, I believe this food to be better than most. Real cooking is important! What kind of experiences have you had with hospital food?