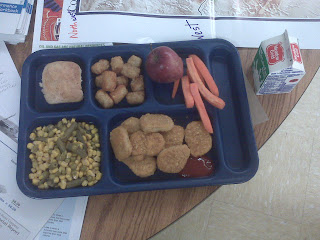 I ended up volunteering at an elementary school on a day almost two weeks ago, and while I was there, I decided to eat lunch just to see what was available to kids in the Denver metro area, as opposed to wherever Mrs. Q is located. I love that I probably wouldn’t have thought of eating at the school cafeteria except Mrs. Q totally inspired me to be on the lookout for what kids are eating these days!
The choices were chicken nuggets or a turkey and cheese sandwich. I chose to order the chicken nuggets because that’s what most of the kids in my class were ordering. The chicken nuggets came with about a cup of (what I think was canned) corn and green beans, a whole grain roll, tater tots, and milk. Then, you can get whatever you want off of the “salad bar” (which isn’t really a salad bar at all, but just where all the fruits and veggies reside). The “salad bar” offered up canned peaches, whole raw apples, raw carrot sticks, and pasta salad (which looked to be little more than cooked pasta in vinaigrette, no extra veggies).
The chicken nuggets were a little bland in my opinion, and the corn/green beans were downright gross – they tasted like the inside of an aluminum can… very salty. And even the apple was extremely under-ripe, almost bitter. While it was clear that the right intentions were there (good intentions being to feed children more nutritious food), I think the execution left something to be desired. I can imagine that the kids wouldn’t want to eat much more than the nuggets, which is what I saw a lot of them doing.
The placement of the salad bar as compared to what the kids get on their plate had me wondering, too. Why would you give kids all the starchy stuff, and then let them choose to eat vegetables or not? Of course they’re going to bypass the salad bar, if given the choice. I feel like you should give the kids a protein and then a bunch of fruits and veggies, then let them choose to add tater tots or rolls to their meal. I guess, however, that I see how they might add a ton of tater tots instead of eating only the 10 they are given on their plate. But I know there must be an answer to that problem!
Also something to note – the lunch I ate was $2.80 for kids to buy, but most of the kids at the school I was at are on 80% subsidized or free lunch programs.
Just thought I would share!
Carter
The Kitchenette
http://www.the-kitchenette.com/