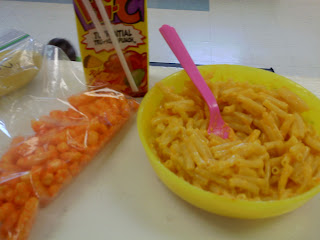 Preschool Food: A look at what our youngest students actually eat.

I have been working in preschools and as a nanny for over 5 years, and while this may not be a lot of time, it was certainly enough to change my views on food forever. I consider myself a healthy eater; I eat fruits and vegetables on a daily basis and generally have a good idea about what I am fueling my body with (even if it is a block of ramen or some macaroni and cheese on occasion), but when I landed my first job in the preschool world and realized I
was eating better than the majority of the toddler’s I was taking care of, I was in shock. It even led to a rather nasty clash with a mother who refused to accept that her child would not eat the “food” she provided and instead insisted I was an idiot who “didn’t have kids and didn’t understand”. True, I don’t have children…but I do know that when a 2 year old screams and cries every single day at the sight of her lunch, yet graciously accepts any food the center provides to her, something needs to be changed. 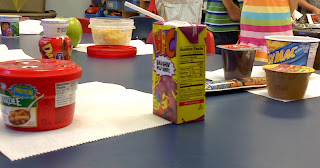 A typical preschool lunch is the same in every classroom, with the exception of infants. The food pyramid is clearly represented in single-serving-microwavable-macaroni-and-cheese, single-serving-pasta-with-sauce and pre-prepared meals in a box (you know what I’m talking about) and of course, the king of children’s foods…the chicken nugget. I appreciate the fact that parents are busy, stressed and usually strapped for cash, but when these issues start impacting the child’s health and eating habits and they are consuming enough sodium and preservatives to kill a horse before they can even write their name, there’s a problem.
Now please don’t think I’m being harsh and critical of parents, I know it is not my place to judge, but realistically, I feel pretty safe in saying that most preschool teachers judge parents on a daily basis. It’s a result of the job we do, we are fooled into thinking we are masters of child care because we juggle anywhere from 4-20 kids without breaking a sweat, and usually on minimum wage. We resent the fact their lunchboxes are full of carbs and sugar because we’re the ones who have to deal with the hyperactivity at 3pm and the meltdowns at 5pm. The “crash and burn” hours are the worst shift to work, the lucky teachers leave after nap when the cavalry comes in to “close”. I have personally noticed that the kids who eat a more balanced meal are generally the ones who behave better and therefore learn more.
Like Mrs Q, I do have some strong feelings and opinions about the food that is presented to children. For one thing, fruit cups, on what planet are barely identifiable cubes of soggy fruit that sit in a cup of a liquid that can only be described as “drool”  something anyone would want to eat? Parents, you can send in fresh fruit, we will cut, peel and serve it to your child. Pudding should be a rare treat…for home. Pizza rolls and Bagel Bites are NOT food, on any level. Ketchup is not a vegetable. Yogurt that comes in a tube is just ridiculous, unless the child is old enough to neatly eat it themselves please, PLEASE, don’t put it in their lunchbox, a cup of yogurt is a much better option and ensures at least most of what you paid for will actually get in their mouth.
Some awesome foods that should be in more lunchboxes are hummus and pita, frozen peas, freeze-dried fruits and veggies, cheese and deli meat rolls, granola, soy “peanut” butter, leftover dinners, small bagels, hard boiled eggs, chips and veggies with guacamole and even soups that come in the same microwavable containers but are a much healthier and balanced option. All preschool teachers want what’s best for their students, we do this job because we love them, we put up with tough working conditions and crap pay for them. Don’t feel like you need to make our lives easier by providing microwavable meals, it may be a little more work to prepare a balanced lunch on both ends, but it is worth it to know a child is eating healthy and can focus on learning and having fun in preschool, after all, it’s what the parents are paying for.
Our guest blogger blogs at: Child Care Confidential