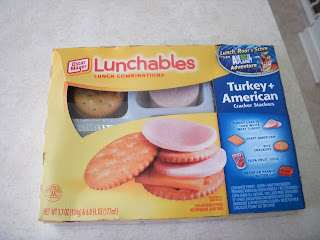 Lunchables: The Other School Lunch
“Mom, can I have that? Pleeeeeease?!” If you’ve ever gone grocery shopping with a kid, it’s more than likely you’ve heard that phrase. Sometimes it’s for cookies, sometimes it’s for ice cream and sometimes it’s for Lunchables. But what’s a Lunchable?
Lunchables were introduced by Oscar Meyer in 1988. Originally marketed as a convenience food, they have since become standard fare in many lunchboxes across the country, with varieties such as pizza, nachos, chicken nuggets and ham and cheese. At first glance, Lunchables seem an acceptable alternative to school lunches. After all, the rolls are made “with whole grains”, there’s a fair amount of protein in them and they seem like complete meals. And they are fun to put together; much more fun than a sandwich or soup. But upon further inspection, and while Lunchables appear fun to eat (as the slogans “Make fun of lunch” or “Lunch your tummy right” imply), there is actually very little nutritional value to the product.
Having never eaten a Lunchable myself (I’d always been too scared of them), I decided it was time to do so (for research purposes). I purchased the Turkey and American Cheese Cracker Stackers. It was hard to decide which one to buy—the section with the Lunchables is fairly large and there are a lot of choices! I decided to purchase one that seemed “healthier” and more like a traditional lunch. But the Lunchable told a different story when I unpacked it. The food, which was comprised of Ritz crackers, little circles of processed turkey, American cheese, Capri Sun and a Reese’s Peanut Butter Cup, looked a bit like the plastic food my daughter uses to play with in her kitchen. Not exactly something that just screams healthy (or edible). 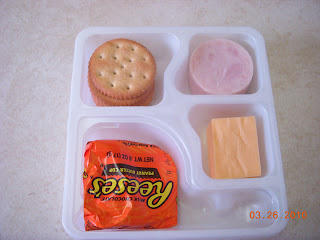 The food is also ridiculously monochrome. The crackers are beige, the turkey is some sort of white/beige combo, there’s yellow cheese and brown candy. The only splash of color is the not picture juice (red) and the Peanut Butter Cup wrapper (orange). Not exactly the rainbow hues recommended by the USDA.
In addition to looking pale and tragic, as well as inedible, there is almost no nutritional value to the food. See for yourself: 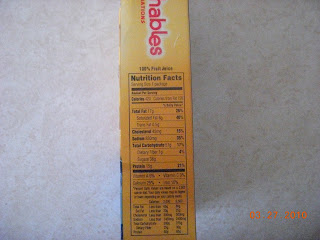 You’ll notice that 35% of the daily recommended amount of sodium is in this box (to the company’s credit, this is down from 75% when Lunchables were first introduced), along with 28% of the daily recommended fat and almost no vitamins. There’s also only 1 gram of fiber; according to an article by Dr. Mary Gavin, fiber is a key element to a healthy diet since it helps with the sense of fullness without adding calories, as well as aiding in digestion.
How about those ingredients: 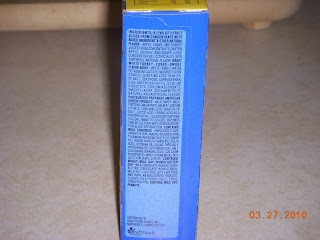 That’s a lot of ingredients for crackers, turkey, cheese, juice and one piece of candy. I can’t even pronounce many of them! I don’t feel good about feeding children ingredients I can’t pronounce or spell without assistance. Given the exhaustive list of ingredients, Lunchables don’t exactly seem like the type of food worthy of the “Sensible Solutions” label. Yet in 2005, for certain Lunchables, that is exactly what happened. (Scary.)
Then there’s the taste. My husband, my daughter and I all gave parts of the Lunchable a try (I’m a vegetarian so I passed on the turkey). I found that the cheese tasted awful and had a rubbery texture while the cracker tasted like some sort of cracker/cardboard box combo (and I generally like Ritz crackers). My daughter was initially skeptical of the food (she actually asked “That’s turkey, right?”) but, like most kids, she enjoyed it overall. My husband, however, had the best reaction. After he was done sampling the Lunchable, he said “If I was starving and at a 7-11, I would choose a candy bar or a hot dog over one of these” (and this is from a man who eats scrapple).
Lunchables have long come under fire for their lack of nutritional value and contribution to childhood obesity. In fact, in 2004, the UK distributor of Lunchables removed Capri Sun and candy from the product and replaced them with orange juice and strawberry yogurt; the US has recently done the same, but only on a select variety of products (Wikipedia). Although that new line of products has made some strides in reducing the calories, sodium and fat, there is still some debate as to whether or not the new products actually qualify as “wholesome“. Check out this breakdown of the new Turkey and Cheese sub (part of the “wholesome” line); it’s pretty eye opening regarding what we as a society are now considering “wholesome” food.
I understand that, on the surface, Lunchables are enticing. They are easy, convenient, effortless, and come in varieties of foods that kids like to eat (nothing bothers a parent more than packing lunch only to find out it went straight to the trash or got traded away). But if you take an objective look at the nutrition information and the quality of the food, is that convenience worth it?
For more information on Lunchables, visit the product’s website. You’ll be glad you did.
Jana Lynch is a regular mom who’s concerned with what her kid eats. You can follow her disasters, adventures and try some of her recipes, all of which can be found on her blog, The Empty Kitchen.

78 thoughts on “Guest blogger: Lunchables: The Other School Lunch”