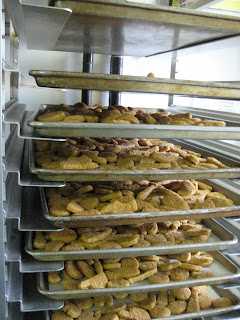 Our resident food service director Ms. A has joined us again to share her perspective. On the one-month anniversary of her blog, Brave New Lunch, she decided to reveal a little more about herself in cluding her name and state (Ali from Massachusetts).
Why My School Went From Family-Style Lunches To Thaw-And-Serve
(companion post on her blog)
Somewhere in the last few decades, the cooking part of my school’s lunch was whittled away and replaced with thaw-and-serve.  It was a gradual change.  According to our oldest lunch lady who just celebrated her fortieth year at the school, students once shared meals family-style.  At each table, the kitchen crew set out placemats and silverware for each student.  Lunch lasted an hour.
As the student population grew, there were more mouths to feed every year.  The school expanded its property.  The kitchen and cafeteria moved to a new space about twenty years ago.  Since then the school allocated a few random spaces in the building for kitchen storage, but the kitchen and cafeteria itself hasn’t expanded any further.
Today it desperately needs a few more pieces of commercial cooking equipment and space to accommodate those items.  We use two convection ovens to do the bulk of our cooking.  Without other pieces, though, it’s very difficult to cook foods that can’t be thrown in the oven.  For example, our stovetop steamer we use may be the same kind you use at home.  If you can imagine steaming vegetables for 500 in that steamer, then you might get an idea of our difficulties.
The kitchen adapted by turning to instant, canned and thaw-and-serve foods.  It’s appealing for some very basic reasons:
Thaw-and-serve requires little training and effort.  By using precooked foods, the skills and labor normally required for cooking aren’t necessary. The school can hire kitchen help with no little training, which is a lot cheaper than hiring a skilled cook.  In the food service industry where labor may cost significantly more than the food ingredients, thaw-and-serve is an attractive option.
Thaw-and-serve doesn’t require lots of space or cooking equipment.  Schools choose thaw-and-serve so they don’t need to expand the kitchen.  Nor is a commercial mixer to knead dough for bread or a steam kettle to boil pasta.  As long as there’s enough oven space there’s no need to build a larger kitchen, which could costs tens of thousands of dollars.  It’s a huge upfront cost without a tangible or immediate academic payoff.
Until the school is ready to put money into the kitchen over other important parts of the school, thaw-and-serve will continue to rule.
Perhaps it is a bit harsh to compare today’s school lunch to a feed lot, but the resemblance is there – a feeding operation designed to cram fuel in the mouths of as many as possible in the shortest period of time.
In less than 3 hours, all 500 students and staff pass through the school cafeteria in five lunch periods.  While fairly calm the first hour, the last hour is chaos.  Each lunch begins with a line of people making their way through the main meal line.  Each person finds a seat and can get up again for additional helpings of food.  Our cafeteria is all-you-can-eat, but to stop huge quantities of food piling up in the waste bin, we only offer one portion of the main meal at a time.
The older students come to the later lunch periods and have additional food options beside the main meal.  The last lunch gets everything the kitchen has to offer – main meal, soup, salad, deli, and bagel bars.  Daily announcements begin five minutes before lunch is over.  It ends with plates and utensils being separated from trash.  Lastly, a few students spray and wipe each table with sanitizer.  This routine happens in each of the five 25 minute lunch periods.  There is ten minute in between each lunch so that we can prepare for the next.
How the students in the back of the lunch line don’t get indigestion is a wonder.  They may not begin eating until a third of the way through lunch.  We lunch ladies stuff our food down in less than fifteen minutes.  Sometimes I manage to simultaneously have a stomachache and be hungry when I leave school a couple hours later!  Eating lunch is simply a means of basic nourishment, nothing else.
The quality, nutrition, and time devoted to school lunch in America are at an all time low.  Letting our next generation grow up eating like this is appalling.  The enjoyment that food can bring and the potential of food as a tool in the academic community are lost too.