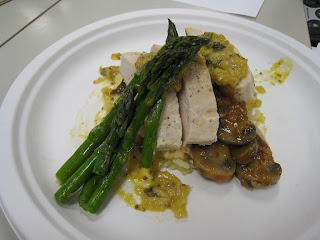 Joon-Yee Chuah is a math teacher in Austin, TX who has a culinary science and anthropology elective for 6th grade students. You can read about his misadventures at his blog: http://whyhenrycooks.blogspot.com/ or you can view pictures from Kitchen Day 2 on Picasa.
Kitchen Day!
Hi, everyone! I’ve been reading this blog for a while and instead of posting a story about what goes wrong with school lunch, I thought I’d write about an experiment that takes us in the other direction. I teach a culinary science and anthropology elective to 6th grade students in Austin, Texas. I have two classes, one with 30 students and one with 20. Each class meets for two hours around lunch time. Once per six-week grading period, the home economics teacher graciously allows us to use the kitchen laboratory to cook a meal. I call this “Kitchen Day.” This is the first semester I’ve taught the course. I am not a culinary professional by any means (unless you count burger flipping when I was 16) and I resent being called a “foodie”, but I love cooking and I love teaching kids. Therefore, I’m willing to try something as crazy as having thirty students in a kitchen at once.
The Meal
On our first Kitchen Day, my students made a meal consisting of salad, garlic bread, baked ziti and a dessert of chocolate chip cookies. I will admit that at the time I didn’t have nutrition in mind, only economics and difficulty level. For Kitchen Day 2, I set a menu that incorporated several vegetable courses served in a more appealing manner and a protein course. In addition, I allowed the students to select a dessert course. The final menu consisted of:
Greek Salad with Cucumber, Feta and Parsley
Braised Rosemary Chicken with Thyme Mustard Sauce
Vegetarian Alternative: Sear Roasted Green and Yellow Squash
Sweet Onion Rice
Mushroom Ragout
Roasted Asparagus
Cinnamon Rolls
Serving Size
As part of the preparation for Kitchen Day I had my students research what an appropriate serving size of each course should be. They determined that the serving sizes were one ounce of salad, a half cup of rice, three ounces of chicken and a half cup of cooked asparagus. What about the mushrooms and the cinnamon rolls? Well, mushrooms don’t really have anything but dietary fiber so we based our serving size off of “what looks good on a plate” rather than how much mushroom an individual should be served. As for cinnamon rolls, no kid wants to eat half of a cinnamon roll. However, we made the actual cinnamon rolls rather small – about two inches in diameter.
Kids in a Kitchen
This continues to be the most challenging part of Kitchen Day. The smaller of my two classes always seems to be more competent in the kitchen. Perhaps it’s because they have more home kitchen experience, but most likely it is because I can provide more individual attention as a scurry about from group to group. The kitchen laboratory in our school has industrial sinks, three ovens with stove tops, portable electric ranges and a good 50 feet of counter space. Students are broken up into groups by recipe or task and given a space in which to work. Somehow, this still manages to feel somewhat inadequate especially during the class period where I have thirty students.

The top priorities for students in this environment are safety and cleanliness. We do a fair amount of safety and sanitation training and establish a culture of safety awareness before entering the kitchen, including rearranging the tables in my classroom to resemble the real kitchen’s layout and role-playing everyone’s task. We also establish procedures for how to safely move about the kitchen, handle knives, heat and raw meat. I always get a kick out of watching the kids in action carrying around a hot pan shouting, “Hot, behind you, coming through!” and having everyone else scurry out of their way. Students must also adhere to a strict dress code before they are allowed to participate. If a student doesn’t pass dress inspection before we enter the Kitchen, they become my personal assistant for tasks outside the kitchen such as setting up the classroom tables for dining.

Experience
My students come from a variety of cultural backgrounds and have a broad range of kitchen skills. Some of them have parents who have worked in the food industry and make cooking a big part of their children’s lives. Others have never tried some of the vegetables we served today. (As an aside, I have some kind of disability that prevents me from baking and the kids are much better at it than I.) However, prior home experience is not a strong indicator as to how productive an individual will be on Kitchen Day. Why? Because Kitchen Day, with its 1.5 hour cooking time limit, is less like cooking in a home kitchen and more like working in a professional kitchen where mental traits such as flexibility, plasticity, the ability to multi-task and personal work ethic are more valuable than discrete cooking skills. It’s surprisingly easy to teach a sharp student how to sear roast a pan of squash, but it’s nearly impossible to teach any individual how to always be productive and not stand around doing nothing. I have a good friend who is a chef with 20+ years of experience and he says that this is the number one problem with young cooks in my town.
Economics
I went to a restaurant supply store to purchase the majority of ingredients for my class. The caveat is that everything must be purchased in bulk. We’re not talking CostCo levels of bulk (though I did end up getting some items from CostCo.) This is restaurant bulk. For example, I purchased a case of 40 pounds of boneless skinless chicken breast at $1.25 per pound. (I ended up having to split it with my chef friend.) The biggest surprise to me that occurred during purchasing was the high cost of onions. Due to the strange weather that’s been sweeping the nation, yellow onions were $1 per pound at wholesale prices!
My budgetary goal was to lower the cost of ingredients to $2 per student, for a total of $100. I asked the students’ parents for donations of $2 to cover the cost of that day’s lunch. Some of them were not able to provide a donation, but their costs were subsidized either by more generous donations from other parents or by the school. I missed the mark and came in over budget by about $50 after everything was said and done, but I was able to invite a few teachers (whose assistance I could not have done without) to enjoy lunch with the students and I had a decent amount of leftovers.
If we look at this microcosm experiment as an example of what can or can’t be done on a large scale, we need to consider the following:
Results

Overall, the students made tasty food that they all enjoyed and the experience was overall a positive one. The teachers who dined with us were impressed by what the students were able to accomplish and really enjoyed the meal. If I were to compare my classes, the larger class always seems to make me pull my hair out a little more than the smaller class. They were not able to successfully make the sauce in time, failed to complete one batch of cinnamon rolls and finished fifteen minutes late. Somehow, the dishwashers managed to use half of a bottle of detergent and all 50 of my kitchen towels and still left pots and pans somewhat dirty. A colleague who assists me on the larger class day says that I frequently resemble Gordon Ramsey in the kitchen. On both days when I get home from school, I usually end up doing any left over dishes, skipping dinner (or eating McDonald’s) and going to sleep at 7pm.

Anyway, I hope you all have enjoyed reading my excessively long post. I also hope that it inspires conversation about some of the great things that can be accomplished with school lunch and some of the challenges we have yet to overcome!