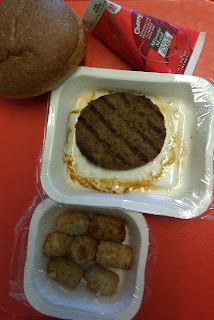 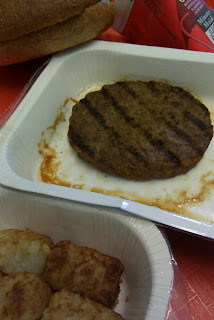 I left the lunchroom with my tray and a little girl caught a glimpse of the red packaging of the fruit icee and screamed with delight,
“ice cream!”

I’m not going to comment on the lunch as I have eaten this same kind of thing multiple times. All I’m going to say was that as I was getting ready for work last night, I had a brief thought, “What am I going to pack for lunch?” The thought came in and then went out of my head. I sort of sighed.

But then I indulged my fantasy of packing my own lunch. It would have been a tuna sandwich, apple, yogurt. I would have made the tuna with one can of chunk light, real mayo and thrown in a handful of raisins. I would have also also put a slice of cheese on the whole grain bread, no, it would be sourdough. And as long as I’m fantasizing, I would have found a way to melt the cheese. There is nothing like a midday tuna melt. A girl can dream.

In regards to a reader comment about choice. There is a meatless alternative on the printed menu, but when I go to the lunchroom, it is rarely put out for the kids to grab. The main meal item is laid out. It’s very much an assembly line and from what I have seen of the kitchen and kitchen staff, well, it is run very efficiently. I feel certain that if they had the equipment, those lunch ladies could build a Ford F150 in one afternoon.

So, when I come in, I take what the kids get. That’s part of the thesis of my project. And I don’t want to stop the momentum of the lunch line by piping up and saying, “I saw a bean burrito on the menu and if you don’t mind I’d like one of those.” Um, yeah, I want to blow my cover! When I ate the bean burrito, it was because a lunch lady asked me if I wanted it. As a rule I do whatever they say. Just like when they offered me the cheese lasagna, I accepted it. But, recently I was offered the cheese lasagna again. I declined.