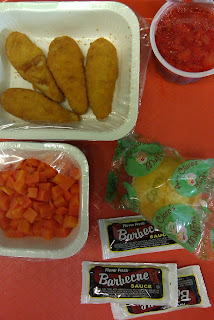 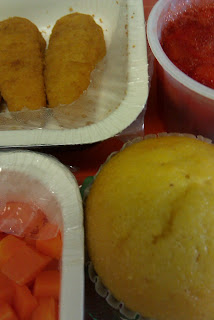 I can’t remember how this meal tasted. Even just a couple hours after I consumed it, I have no idea what flavors were present. I don’t remember a texture jumping out at me. When I ask my students “What did you think of your lunch?” they give me a blank stare. Now I get it.

I don’t remember eating the corn muffin. It’s like I blocked it out. The other day I ate the fruit jello and I thought it was fabulous. Today I took a couple sporkfuls and that was it. Could my taste buds have amnesia? Or worse have they deserted me? Whatever the case the little buds that remain in my mouth may need therapy.