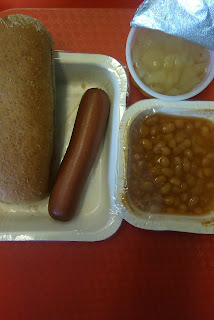 I forgot to grab a ketchup packet so I had a rough time getting the hot dog down. The beans were good, but I avoided the fruit cup as usual and just munched on an apple I brought from home.

Kids love hot dogs and I also like a good hot dog in the summer (as I’ve said before I like to have a frank from the grill or at the ballpark). I don’t think there’s anything wrong with hot dogs in moderation, but I get upset when hot dogs are offered frequently to kids, especially during the winter when kids require more robust nutrition to prevent illness.

I worry that kids are getting offered junk and convenience food because adults believe that that’s all they will eat for school lunch. Obviously we want kids to eat, but should not cater to what a 7 year old would theoretically prefer to eat.

Does a schoolchild have the decision making power or the palate to have a preference? Aren’t we in the business of educating children not them dictating what they want? Do they really have a clue what they should or shouldn’t be eating?