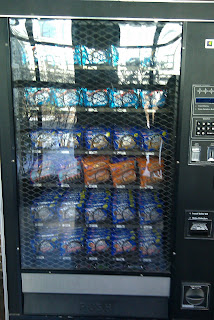 Disclaimer: this is not from the school in which I work, but from one I visited another time. My school does not have a vending machine.

Like I said in a previous post, there will be some gaps in school lunch consumption in February.

So instead of my usual lunch post, I’m sharing a photo I took of a vending machine that I saw at a different school. When I walked by the vending machine, I was taken aback. It was visually shocking. What you see are lots of pop*tarts on the bottom, rice*krispie*treats on the top, and some generic peanut butter cracker/cookie sandwiches. I felt obligated to take a picture of the vending machine because it startled me. I did it as discreetly as I could and I tried to keep moving so I don’t know how much the items cost.

I should also say that there was another vending machine nearby that held the usual assortment of chips, chocolate, and candy.

Many schools have given up vending machines due to the belief that they are making children obese. I think there are many kids who eat unhealthy foods right after school. If you have a vending machine snack that has upwards of 200 calories every single day after school, you will start to gain weight.

Here are a couple companies that I located online: