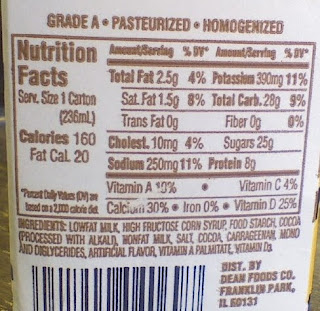 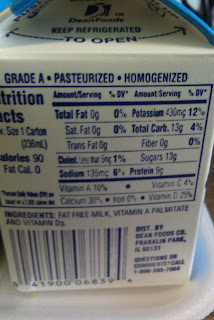 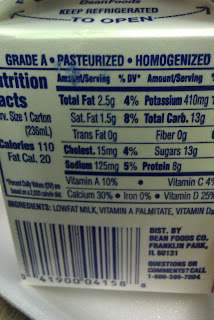 Milk has been there my whole life. I loved the stuff and drank it everyday. But like many folks in my family as I have gotten older it’s gotten harder for me to digest milk products. This project has revealed to me that I’m lactose-intolerant. Just to make my life easier I’m cutting out straight milk and ice cream (dairy products with the most lactose). Lact*aid products although great just seem like too much fooling around for me with my busy schedule. I can’t imagine removing dairy completely from my life since I love yogurt (and luckily it is low in lactose).
Milk is a staple of school lunches. Kids really do love it (I know my toddler does). I think the debate about milk that I’ve seen online is that students should only be served skim milk because it is low in fat and that it does not contain high fructose corn syrup (HFCS) like chocolate milk. I am concerned about HFCS and how it influences children’s behavior, but I don’t have a lot of information about it. I also think it’s possible that students who don’t get good fats (vegetable oils) in their diet could benefit from milk fat instead of trans fat.